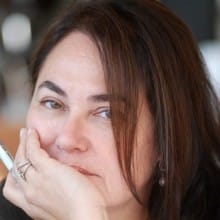 The John Adams Institute presented a lecture with Amy Bloom. She might be trained as a psychotherapist, but her prose is anything but analytical. Her sensitive exploration of human interactions, expressed in a style that is luminous yet engagingly direct, has won her many fans and awards. Her novel, Away, tells the picaresque story of a Russian Jew in the 1920s whose family is killed in a pogrom and who then finds her way to New York and its Yiddish theater world. News that her daughter may be alive – in Siberia – then sparks an improbable transcontinental trek. Critics have hailed it as “far and away one of the best books of the year.”The New York Times called it “a classic page-turner, one that delivers a relentlessly good read.” Amy Bloom also visited the John Adams Institute in 2014 and 1997.