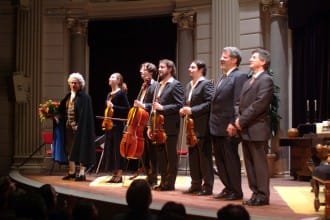 In the presence of Her Majesty the Queen, the John Adams Institute proudly presented:

An American Evening at the Concertgebouw

In honor of the 225th anniversary of John Adams’ arrival in this country, Dutch and American musicians will perform works by Copland, Dvorak and the premiere of:

John Adams in Amsterdam “A song for Abigail”, work by American composer Gary Fagin, specially commissioned by the John Adams Institute for this event. The composition – a dramatic song cycle for baritone and string quartet – is set during the American Revolution, when Adams lived in Amsterdam and served as the young nation’s first envoy to Holland. The libretto, by Terry Quinn, is based on letters home to his wife Abigail. The first copy of our book John Adams in Holland 1780-2005 will be presented to Her Majesty the Queen, on this occasion. Performances by the Matangi String quartet, Lars Wouters van den Oudenweijer (clarinet), Hans Eijsackers (piano) and Richard Lalli (baritone).