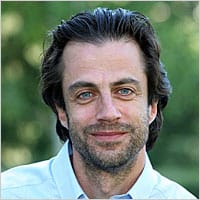 The Egyptologist is a true crime story. The book jacket heralds it as ‘a darkly comic labyrinth of a story.’ Written in the form of journal entries and letters, The Egyptologist contains two plots meandering back and forth in time, each in their appropriate style. One story is woven around Egyptologist Ralph Trilipush and his quest for the tomb of the legendary Egyptian king Atum-hadu. This is set around Howard Carter’s discovery of the tomb of Tutankhamen in de 1920s. As a Harvard professor with an Oxford background, Trilipush charms a Boston girl, becomes her fiancé and persuades her wealthy father and his friends to invest in his Egyptian expedition. In the other tale, retired private investigator Harold Ferrell from Sydney recollects in 1954 the most baffling case of his career. While searching in 1922 for a young Australian soldier, heir to a British brewery fortune, Ferrell stumbled upon a connection between the Trilipush explorations and a suspect death.
Ralph Trilipush, an obsessive archeologist, causes you to wonder whether he is a phony and a scam artist or a pompous dreamer with a mission. The PI brings to mind Humphrey Bogart as Philip Marlow. The Egyptologist is completely different from Arthur Philips’ novel Prague. Gary Shteyngart remarks: ‘Beneath Arthur Phillips’ singular wit and peerless comic timing, lies a spot-on parable of twentieth-century self-delusion and the painful quest for immortality.’

Arthur Phillips’ first novel, Prague, was a national bestseller, a New York Times Notable Book, the recipient of the Los Angeles Times Art Seidenbaum Award for First Fiction, and has been translated into seven languages. Phillips lives in New York with his wife and two sons.