In 2016 the John Adams hosted an event with Philipp Glass, one of the most influential composers of the 20th century. On 11 May a major charity gala ‘Playing the Cathedral‘, will take place at the Oude Kerk in Amsterdam to fund the church as an international music stage. American composer Philip Glass will play one of his compositions on the Baroque Vater-Müller organ. Dutch chef Robert Kranenborg composes the menu that will be served between the music. Click here to get a sneak preview. 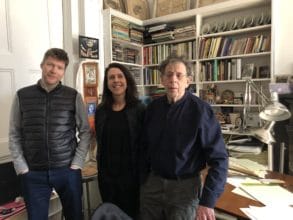 Philip Glass in his study with Director of the Oude Kerk, Jacqueline Grandjean and Director of Music Jacob Lekkerkerker