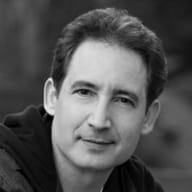 Brian Greene has been called ‘the closest thing physics has to a pop star’. The university professor and Rhodes scholar is one of the world’s foremost exponents of Superstring Theory. In the U.S., he is a frequent guest on science documentaries, late night talk shows and even a Hollywood film.

Greene’s newest publication – The Fabric of the Cosmos: Space, Time and the Texture of Reality – guides readers through the paradoxes of time travel and the search for a ‘theory of everything’ using layman’s terms, colorful analogies and his trademark wit.

Brian Greene is professor of physics and mathematics at Columbia University in New York. A child prodigy, he could multiply 30-digit numbers by the age of five. His earlier book, The Elegant Universe, was a finalist for the Pulitzer Prize in nonfiction and was made into a popular, three-part television documentary.

The evening was moderated by Prof. dr. E.P. Verlinde

In cooperation with Spectrum Publishers and Penguin Books Benelux.