A Nation Torn
All six blog posts in our series “A Nation Torn” on the 2014 midterm elections have now been assembled in a wonderful digital publication for your enjoyment. December 8, 2017 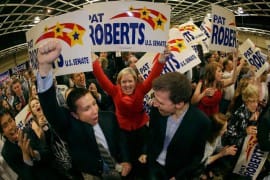 A Nation Torn
The midterm elections revealed the deep divisions within the US political system. With a Republican majority in both the House of Representatives and the Senate, Obama has a tough last two years ahead of him. In a short series of blogs, a number of America-watchers will reflect on the question: where do we go from here? November 12, 2014