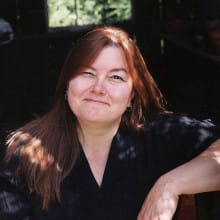 The John Adams Institute welcomed American novelist, short story write and essayist Dorothy Allison , who spoke about her work and her novel Cavedweller. Regarded as Allison’s most optimistic work, Cavedweller is a tale of strength, will and redemption. The novel is about Delia Byrd, an alcoholic rock singer who quites her troubled career to return to cayro, Georgia – a town that has never forgiven her for fleeing her abusive husband and abandoning her two baby girls. In her determination to build a family with her two daughters and a third she gave birth to in California, Delia is prepared to atone for her past, even if that means going to hell and back. Born in 1950 in Greenville, South Carolina, Dorothy Allison was raised by a typically white trash teen mother and an abusive father. She was the only child in the family to go to college. She now lives with her partner and son in California.