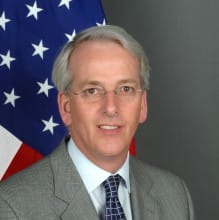 The John Adams Institute was proud to present Ivo H. Daalder, senior research fellow at The Brookings Institution in Washington, D.C. and member of the U.S. National Security Council during the Clinton Administration. Publishing house Het Spectrum brought out a Dutch translation of his latest book, America Unbound: The Bush Revolution in Foreign Policy (Amerika ontketend), co-authored with fellow Security Council staffer James M. Lindsay. Dr. Maarten van Rossem, history professor at the University of Utrecht and frequent media commentator on U.S. affairs, introduced Daalder, interviewed him about his writings and fielded questions from the public.

In America Unbound, Daalder and Lindsay dispel the myth that U.S. President George W. Bush is the pliable puppet of neoconservatives and special interests. Instead they sketch a compelling portrait of a leader with a coherent – though flawed – worldview that has revolutionized America’s policy towards allies and enemies alike. Selected by The Economist as one of the year’s top reads on politics, America Unbound is a ‘splendidly illuminating book,’ writes the New York Times.

A frequent guest on the opinion pages of leading US and European newspapers, Daalder is Senior Fellow in Foreign Policy Studies at the Brookings Institution, where he also holds the Sydney Stein Jr. Chair in International Security. The author was born in The Hague and educated at Oxford, Georgetown and M.I.T.. Previous books include Winning Ugly: NATO’s War to Save Kosovo and Getting to Dayton: The Making of America’s Bosnia Policy. 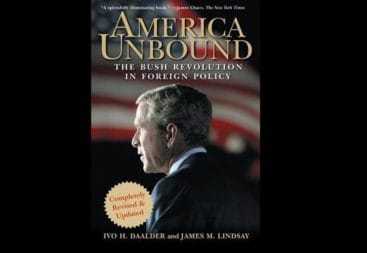