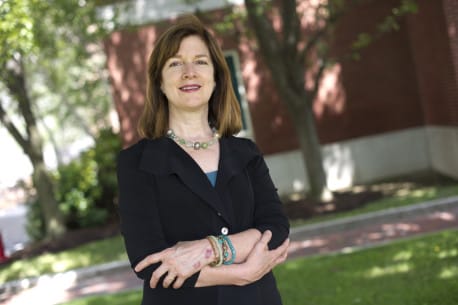 Given the lack of national policy on climate change, cities have stepped into vacuum and are developing strategies of their own. Good for the climate, good for the economy, says urban planning professor Joan Fitzgerald.

Emerald City – that was where Dorothy met the Wizard of Oz, after a long and arduous journey down the Yellow Brick Road. How disappointed she was when it turned out that the Wizard was not a Wizard at all, but a lost soul from Kansas, just like herself.

Emerald Cities, plural, is the title of a book by Joan Fitzgerald, professor of urban planning at Northeastern University in Boston. She is in Amsterdam this week at the invitation of the University of Amsterdam and is participating in a panel this evening at Pakhuis de Zwijger (sold out).

You say: green technology is not only good for the planet, but also for the (local) economy.

The clean technologies that are being developed to address climate change will be the growth industries of the future. Many cities which have seen their industrial economies decline, are finding a new source of jobs and income in technology that addresses global warming, pollution, energy use and social justice.

The city of Toledo, Ohio for example, specialized in autoglass, but saw its economy fade as the big auto manufacturers failed. But a windshield is layers of glass with things embedded in between – just like a solar panel. The city was able to jumpstart a new green economic sector. California is acting like a country in its own right: it signed an agreement with the Chinese province of Jiangsu to cooperate on solar energy.

Given the lack of a national policy, cities like Chicago, New York, Portland, San Francisco and Seattle are taking matters – the environment and their economy – into their own hands. But there is leadership on the state level. California passed laws to divert trash from landfills, and now 75 percent of the trash is recycled. Massachusetts assists cities that are willing to adopt stricter energy codes. In Arizona, however, a state that could be a leader in solar technology, is pulling back now that the Tea Party runs the legislature.

Cities can push, but they can’t fill the vacuum all on their own. Cities that do well do well because there is also state action.

Is there any point in tackling global issues like this on a small local level?

Yes! Much needs to be done at the local level: district heating and cooling, storm water management, recycling, transportation. Cities are the greenest places in the world because they are dense. A multi-unit building does more for energy efficiency than even the most efficient single-family home. And in cities people are more likely to use public transportation. Many cities are working to promote ‘transit-oriented development’, with housing for different income groups located around public transport. The trick is to avoid ‘eco-gentrification’.

Is a green job necessarily a good job?

No. Recycling creates 9 times as many jobs as dumping our trash on a landfill, but those are not good jobs. You can, however, make a bad job good by paying better. San Francisco demands that these workers get the minimum wage; Boston managed to get around that because the mayor was willing to make an exception.

We can do much more up front: we can throw away less food and less packaging. Reduce reuse recycle. We spend much more energy on the recycle rather than on the reduce. The solution is to make the producer responsible for taking the product back and recycling it. Why should the city have to deal with that? 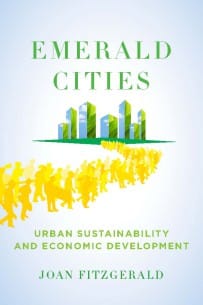 Political scientist Benjamin Barber says cities are the government form of the future; his new book is called ‘If Mayors Ruled the World’.

I don’t think mayors rule the world, but they find themselves confronted with situations in which they have to act. Bloomberg made New York move ahead on climate change. The mayor of Norfolk, Virginia, where the world’s largest navy base is located, has to deal with sea level rise on a daily basis, whether he believes in climate change or not. Mayors see that green technology is the next sector in economic development.

Your book appeared in 2010. What has changed since?

We are at the point where denial of climate is no longer politically feasible. A lot of new technology has been developed, the viability of wind and solar energy in the US been established. Sandy helped gain acceptance for the need to address sea level rise and storm water management. That is the significance of the deal Obama recently signed with China. He suddenly got a spine! And the voting public wants a strong leader, even if they don’t agree with him.