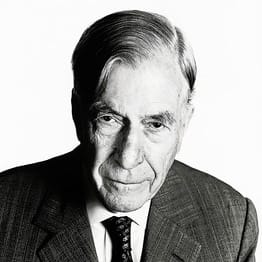 The John Adams Institute hosted an evening with legendary American political economist John Kenneth Galbraith, who has become one of the most influential scholars in American politics, not only as professor of economics at Harvard but also as a presidential advisor and political leader. Always unorthodox and controversial, John Kenneth Galbraith has challenged traditional economic though and theory. his most famous study, The Affluent Society, shaped the American economic policy of the 1960s and inspired President Lyndon B. Johnson’s effort to create the Great Society. His other classic studies include American Capitalism, The New Industrial State and The Culture of Contentment. During the 1960s, John Kenneth Galbraith served as American ambassador to India, where he was confronted with poverty on a large scale. He was also personal advisor to Presidents Kennedy and Johnson, but he became disillusioned by America’s role in Vietnam. As national chairman of Americans for Democratic Action, Galbraith kept the spirit of American liberalism alive.

John Kenneth Galbraith died in 2006 at the age of 97. Read his NY Times obituary here. 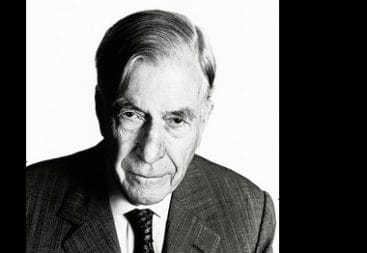