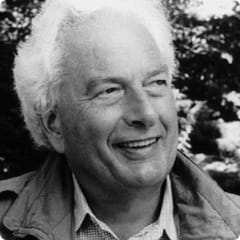 On March 16, 1995, the John Adams Institute hosted best-selling author Joseph Heller. He spoke about his novel Closing Time, the sequel to Catch 22. The evening was moderated by British author Anthony Paul.

In 1961, Joseph Heller published his first, best-selling novel, and unique war satire, Catch 22. Although he has since published many other works, including Something Happened, Good as Gold, and Picture This, Heller’s reputation still largely rests on his first novel. Loosely based on some of Heller’s own war experiences, Catch 22 depicts a group of American flyers stationed on a small island in the Mediterranean during World War II. They are absurdly caught up in a Kafkaesque double bind known as ‘catch-22’. The ‘catch’ in question so effectively captured the paradoxical nature of army logic that ‘catch-22’ is now found in dictionaries, having become a part of everyday English. Thirty-three years later, Heller wrote his sequel to Catch-22. Closing Time reunites many of the characters in Catch 22 as they face old age and death. Beneath its absurd comedy, Closing Time explores the all-encompassing moral vacuum as we face the close of the century.

Joseph Heller died of an heart attack in 1999 at the age of 76. Read his NY Times obituary here.