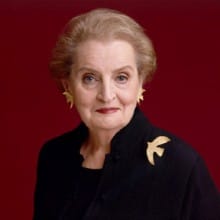 The John Adams Institute proudly presented an evening with former U.S. Secretary of State Madeleine Albright, who talked about her autobiography Madame Secretary: A Memoir.

This autobiography recounts her childhood in the 1930’s as the daughter of a Czechoslovakian diplomat, the family’s flight to London where they spent World War II, their emigration to the United States in 1948, her determination to continue her studies while raising three daughters, and the painful breakdown of her marriage.

This first-hand account brings to life the world leaders and politicians she met and worked with during her years of public service, and the real difficulties of being the only woman at the table. President Clinton acknowledged her valuable contributions by appointing her in 1992 to head up the U.S. delegation to the United Nations and serve as permanent U.S. representative to that body. Later he appointed her as U.S. Secretary of State.

Madeleine Albright is an archetype of a generation of women whose education equipped them for high-flying careers, but not for the compromises they were forced to make as wives and mothers. 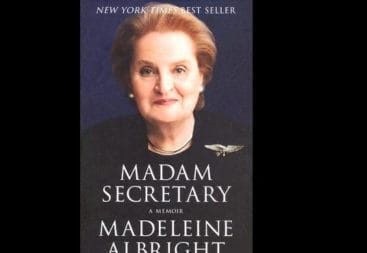