What makes a city cool? A certain threshold of restaurants and bars with exposed brick walls? Pairs of Doc Martens boots per capita? The percentage of residents who subscribe to the “Hipster Chill” playlist on Spotify?

I’d like to think the answer is a bit more profound. Here’s a theory: the coolness of a city is largely determined by the vibrancy of its creative, cultural, and countercultural scenes. Artists, writers, musicians, filmmakers, and other alternative types make a place culturally dynamic, and the more innovative, free-thinking, boundary-pushing individuals hanging around, the better.

What draws these people to a specific place? The two most important factors: proximity to other creative people, and affordable space for living, working, collaborating, and congregating.

Coolness, of course, is closely related to demand, and demand usually spells trouble for affordability. We all know how the situation plays out. Alternative types rent apartments and create studios in a low-income neighborhood. The area gains notoriety as the new hip spot. Prices rise. Soon, the people who sparked the action are pushed out, along with many of their neighbors. The edge that made the place enticing is smoothed over, commodified, commercialized, and made palatable to more bourgeois tastes. The displaced creatives move to another neighborhood, and the cycle begins again. Lather, rinse, and repeat until vast swaths of the city are unaffordable and culturally depleted.

Are creative people destined to be pawns in the economic development game, alternating between roles as bleeding-edge gentrifiers and victims of displacement? Are off-beat, alternative neighborhoods doomed to become sanitized, faux-bohemian versions of themselves? Or is there a way to disrupt this market cycle and inject a measure of security and stability into a city’s creative landscape? 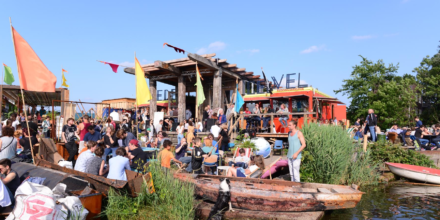 For those concerned with these kinds of issues, Amsterdam has a strategy worthy of your attention. Since 2000, the city has administered a robust set of policies aimed at supporting artist studio spaces and creative incubators. A municipal government agency known as the Bureau Broedplaatsen helps groups of artists transform abandoned or underutilized spaces into places for creative work. The agency provides subsidies, credit guarantees, project management expertise, and legal assistance to get the incubators off the ground, and then the spaces are run as independent organizations. With a fifteen-year budget of only €48 million, the city has created over 60 incubators housing over 170,000 square meters of highly affordable creative space. Thousands upon thousands of artists have benefitted.

Owing to the bottom-up design of the policy, every broedplaats is different. Some are exclusively working spaces. Others include housing for artists. Many have a community-oriented element, like restaurants, bars, or event venues. Others even offer public goods like community gardens and high-capacity kitchens. The end result—a city with an extraordinarily rich and diverse cultural fabric, with individual nodes of creativity scattered across its many neighborhoods.

It’s interesting to note the ways that the Bureau Broedplaatsen has changed over its nearly two-decade existence. Like many other cities, the real estate market in Amsterdam in 2000 was struggling. The broedplaats policy was initially a kind of concession to the city’s squatting community, which was very strong in the 80s and 90s. Creating broedplaats was a way for the city to semi-institutionalize its abundant countercultural energy and leverage it to facilitate economic development and neighborhood revitalization. Now, as the housing market has caught fire and available space has plummeted, the agency has adopted more of a defensive stance, working to preserve the spaces it has already created and developing new strategies to bring about additional ones. High demand for studio spaces among artists themselves has also led the Bureau to implement policies to increase turnover, a move that has been controversial to some in the creative community.

If you’re intrigued by the broedplaats idea, stay tuned—I hope to write significantly more about this topic over the coming weeks. For now, suffice it to say that it’s inspiring to see a city so committed to public intervention in support of its creative community. Though the contributions of individual artists and creative people are not always discernable in the broader cultural fabric of a city, there’s no doubt that their collective presence has been tremendously enriching here. Amsterdam became a global hotspot of countercultural cool because of the vibrancy of its free-thinking creative scene, and the broedplaats policy is a forceful statement from local government that it intends to keep things that way.