During my time at Impakt as an artist-in-residence, I have been working on a new project called EquityBot, which is an online commission from Impakt. It fits well into the Soft Machines theme of the festival: where machines integrate with the soft, emotional world. 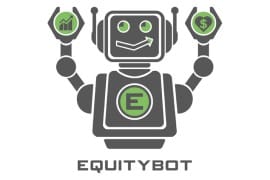 EquityBot exists entirely as a networked art or “net art” project, meaning that it lives in the “cloud” and has no physical form. For those of you who are Twitter users, you can follow on Twitter: @equitybot

What is EquityBot? Many people have asked me that question.

EquityBot is a stock-trading algorithm that “invests” in emotions such as anger, joy, disgust and amazement. It relies on a classification system of twenty-four emotions, developed by psychologist and scholar, Robert Plutchik. 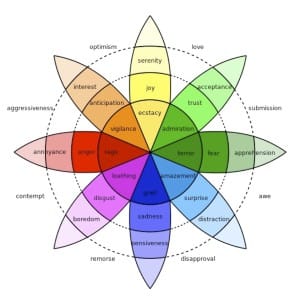 During stock market hours, EquityBot continually tracks worldwide emotions on Twitter to gauge how people are feeling. In the simple data-visualization below, which is generated automatically by EquityBot, the larger circles indicate the more prominent emotions that people are Tweeting about.

At this point in time, just 1 hour after the stock market opened on October 28th, people were expressing emotions of disgust, interest and fear more prominently than others. During the course of the day, the emotions contained in Tweets continually shift in response to world events and many other unknown factors. 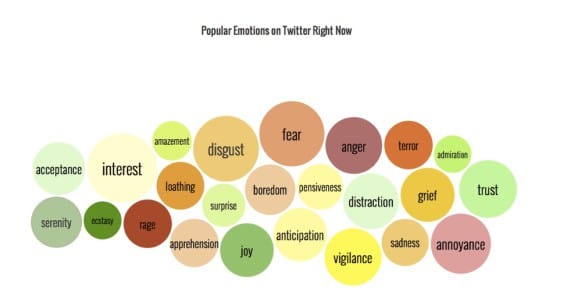 EquityBot then uses various statistical correlation equations to find pattern matches in the changes in emotions on Twitter to fluctuations in stocks prices. The details are thorny, I’ll skip the boring stuff. My time did involve a lot of work with scatterplots, which looked something like this. 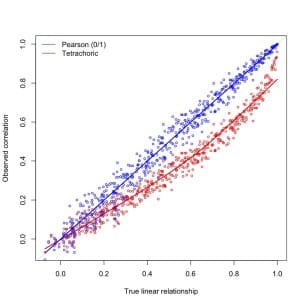 Once EquityBot sees a viable pattern, for example that “Google” is consistently correlated to “anger” and that anger is a trending emotion on Twitter, EquityBot will issue a BUY order on the stock.

Conversely, if Google is correlated to anger, and the Tweets about anger are rapidly going down, EquityBot will issue a SELL order on the stock.

EquityBot runs a simulated investment account, seeded with $100,000 of imaginary money. In my first few days of testing, EquityBot “lost” nearly $2000. This is why I’m not using real money! 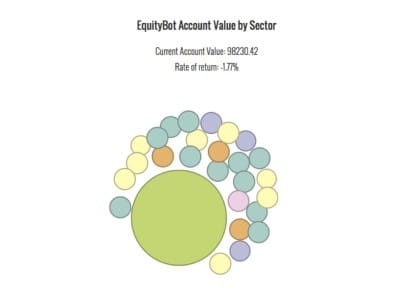 The project treats human feelings as tradable commodities. It will track how “profitable” different emotions will be over the course of months. As a social commentary, I propose a future scenario that just about anything can be traded, including that which is ultimately human: the very emotions that separate us from a machine.

If a computer cannot be emotional, at the very least it can broker trades of emotions on a stock exchange.

As a networked artwork, EquityBot generates these simple data visualizations autonomously (they will get better, I promise).

It’s Twitter account (@equitybot) serves as a performance vehicle, where the artwork “lives”. Also, all of these visualizations are interactive and on the EquityBot website: equitybot.org. 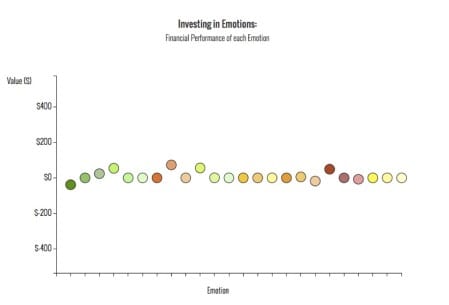 I don’t know if there is a correlation between emotions in Tweets and stock prices. No one does. I am working with the hypothesis that there is some sort of pattern involved. We will see over time. The project goes “live” on October 29th, 2014, which is the day of the opening of the Impakt Festival and I will let the first experiment run for 3 months to see what happens.

Feedback is always appreciated, you can find me, Scott Kildall, here at: @kilda