The Travels of Kaufmann’s Office

By Tracy Metz, Director of the John Adams Institute The director of Frank Lloyd Wright’s 1930’s iconic house Fallingwater recently spoke at the John Adams Institute. Two of our staunch followers, Rick and Marga Donehoo, told me later that they had seen the office that Frank Lloyd Wright designed in 1937 for Fallingwater’s owner, Pittsburgh department …

By Tracy Metz, Director of the John Adams Institute

The director of Frank Lloyd Wright’s 1930’s iconic house Fallingwater recently spoke at the John Adams Institute. Two of our staunch followers, Rick and Marga Donehoo, told me later that they had seen the office that Frank Lloyd Wright designed in 1937 for Fallingwater’s owner, Pittsburgh department store magnate Edgar Kaufmann, in the Victoria and Albert Museum in London.

Kaufmann used the office until his death in 1955. It is now the only complete, original FLW interior in Europe. But how did the office from Pittsburgh end up in London? 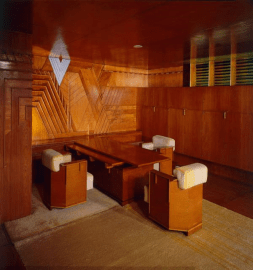 Zorian Clayton, assistant curator of furniture, textiles & fashion at the V&A: “The office, which is made up of 240 parts and panels, occupied a corner of the tenth floor of Kaufmann’s department store. In 1957 his son Edgar J. Kaufmann Jr. (1910-1989) moved it to the headquarters of the Edgar J. Kaufmann Charitable Foundation and Charitable Trust, on the fifteenth floor of the First National Bank Building in Pittsburgh.”

According to V&A curator Christopher Wilk, who wrote a book about the office in 1993, Kaufmann Jr.’s staff supervised the painstaking reassembly of the office complete with all of its accessories. Replacements for the worn upholstery seats and backs were installed, although the originals were retained.

“During the late 1960s or early 1970s,” writes Wilk, “Kaufmann Jr. considered donating the office to Columbia University’s architectural library. But it was too large for the space available and the matter was dropped. Similarly, in 1968 he approached the Metropolitan Museum of Art in New York, with a proposal that he donate the office to its American Wing. Although the gift was agreed to in principle, Kaufmann apparently withdrew the offer.”

It was then that Kaufmann looked to Europe. Wilk: “In 1972, he offered the office as a gift to the V&A, where his friend Elizabeth Aslin was then the assistant director. Between 1972 and 1973, efforts were made to ﬁnd a suitable American organization through which to donate the room, in order to allow Kaufmann a tax deduction. In the end, no such organization could be found and the room was donated without any tax benefit.”

The office left Pittsburgh in December 1973 and arrived at the V&A six weeks later, where it entered the collection as the first twentieth-century period room. Kaufmann wrote to the director, Sir John Pope-Hennessy, to say that “I am very proud, as well as pleased, that this good example of Wright’s mature art will be visible in Europe under the aegis of the institution that led the scholarly and popular revaluations of the arts of design…Wright’s work could not have found a safer or more suitable haven.”

Soon after, however, it disappeared into storage and stayed there until 1990-’91, when it was loaned to four venues in Japan – Kyoto, Tokyo, Yokohama and Kitskyushu – where it was seen by over 150,000 people. Back in London, it remained on view from January 1993 until 2005.

“Sadly, though, the last installation at the V&A was in a remote location that was difficult for visitors to find,” says Fallingwater director Lynda Waggoner. “During the renovation of the museum a few years ago it was disassembled and place in storage. I don’t believe there are any plans at the moment to reinstall it. It is a shame because it is a lovely space.”

The office did reappear briefly, and partially, in 2013 in the Tate Britain, in an installation by the young English artist Adam Chodzko for a major exhibition on Kurt Schwitters. Schwitters was forced to flee Nazi Germany in 1937, first to Norway and later to Britain, where he died in poverty. When Kaufmann Jr. was a curator at MoMA, he arranged for Schwitters to be sent $1,000 by the Museum.

Ultimately, then, the peregrinations of Kaufmann’s office symbolize the rebuilding of a network of relationships and places across art and architecture of the twentieth century.