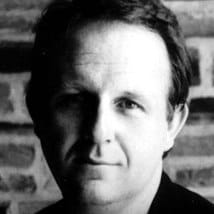 The John Adams Institute welcomed Canadian author Wayne Johnston next month to talk about his first work of non-fiction, Baltimore’s Mansion, which is published in Dutch by De Geus Publishing House as Het Huis van Baltimore. A beguiling blend of family history and autobiography, Johnston’s book was awarded the Charles Taylor Prize for Literary Non-Fiction. Jan Donkers, writer and journalist, introduced the author and moderated the discussion with the audience.

In this memoir the author plumbs his Newfoundland roots, intertwining his Johnston family history with that of the peninsula of Avalon on the east coast of Newfoundland. The Johnstons are descended from Irish immigrants who settled in Ferryland, Lord Baltimore’s Catholic colony on Newfoundland. Their men ‘went from being sea-fearing farmers to sea-faring fishermen.’ Each generation resolves to escape the hardships of life at sea, but their connection to this fantastically beautiful but harsh land is as eternal as the rugged shoreline, while the generation gaps that emerge may be as inevitable as the winters they endure. In a family saga haunted by unfulfilled dreams, Johnston brings his grandfather and father thrillingly and captivatingly to life.