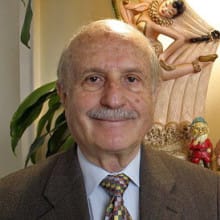 In the lecture series American Literature Today, the John Adams Institute will present an evening with the psychiatrist and author Professor Yehuda Nir.

Yehuda Nir was born in 1930 in Lwow, Poland, a happy child in an affluent Jewish family. The war brought his privileged existence to an end. In 1942 his father was murdered by the Germans. Yehuda, his mother and sister left Lwow and managed with guile, cunning and amazing luck – using several different disguises – to evade the Germans and stay out of concentration camps. A Lost Childhood is a gripping account of these years.

In 1948 Nir joined the Israeli Army and fought in the War of Independence, in 1958 he graduated from the Hebrew Medical School in Jerusalem, in 1959 he arrived in the US to train is psychiatry. He worked as Chief of Child Psychiatry at Memorial Sloan Kettering Cancer Center and Assistant Professor of Psychiatry at Cornell Medical College.

Nir and his wife, psychologist Dr. Bonnie Maslin, collaborated on two self-help books and worked together in private practice. He served on the executive board of the American Gathering of Holocaust Survivors.

Because Yehuda Nir especially wants the younger generation never to forget the atrocities committed by the Germans, he decided to give every Dutch and Flemish secondary school a copy of A Lost Childhood for their libraries  or to be used as classroom texts. The books were presented to the Minister of Education, Jo Ritzen, during Mr. Nir’s visit to the Netherlands.

The evening was moderated by Max Arian.

The evening was sponsored by Ramada Hotel Amsterdam and Uitgeverij Kwadraat