Can I be who I am? It’s one of the questions the exhibition Pilgrims to America – And the Limits of Freedom presents to its visitors. If we could ask the strict, Puritan religious community in England in 1608 which we now know as the Pilgrim Fathers, they would probably have answered with a negative: no, they could not be who they were in the England of that time. 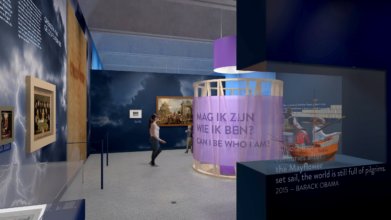 Therefore, after clashing with the English State Church and the English King over their beliefs and in fear of persecution, roughly a hundred of them decided to pack their bags and head to the Dutch Republic. The city of Leiden, a fairly tolerant city for those days, had no objections taking the English refugees in. They were free to live, believe and worship as they saw fit, as long as they worked an honest job and would live in peace.

The Pilgrims settled down quietly in Leiden and lived mostly within the confines of their close-knit community. But God had bigger plans for them.

Heaven or hell
Their ultimate goal was to return to the ‘pure’ faith of the first Christians and rid the church of everything that had no literal basis in scripture. What set the Pilgrims apart from other Puritans, was their conviction that they had been divinely chosen to serve as a beacon for the salvation of humanity, predestined to create ‘one nation under God’. If Leiden turned out not to be the right place for this ‘holy experiment’, God would surely lead them somewhere else.

Geneva Bible as used by the Pilgrims

Their strict beliefs left little room for dissent: anyone who preferred different rules of faith was on his way to hell. The tolerance the Pilgrims sought for themselves in order to freely exercise their beliefs, did not extend to the outside world.

Fear of the other
Not surprisingly, then, one of the reasons why the Pilgrims decided to leave Leiden was fear of assimilation. City life came with all kinds of temptations, and after over a decade, it got harder and harder to stay on God’s righteous path and to maintain their ‘Englishness’. Over time, their journey over the Atlantic has become synonymous with the American urge for freedom, but disdain for how others lived their life should be part of the narrative too. 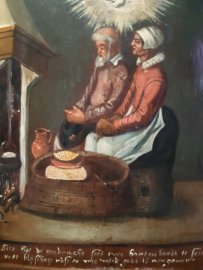 Fear of war
But we have to be fair. The reasons for their desire to leave were manifold. Life in Leiden was tough. They worked hard for low wages, mostly in the textile industry. There was also a fear of war. After a twelve-year truce, the relationship between the Dutch Republic and the Spanish had gotten very tense, with dire implications for the degree of tolerance and freedom of expression.

Time to go
This becomes clear from what happened to William Brewster, a Pilgrim who printed anonymous publications criticizing the king of England. After pressure from the English, whose help the Dutch depended on in case of a new war with Spain, Brewster was arrested and his printing materials seized. This move had been unthinkable in the years before and showed the Pilgrims that their time in Leiden was coming to an end. After eleven years, they packed up and left again, paying the price for how they envisioned freedom.

Next week: The Pilgrims face a dilemma. Should they stay or should they go?

The exhibition ‘Pilgrims to America – and the Limits of Freedom’ is part of Leiden400, a commemoration of the 400th anniversary of the sailing of the Mayflower. It highlights not only the story of the Pilgrims but the cultures and places they came into contact with as well.
Part of the program is a city walk which leads visitors along sites connected to the Pilgrims, like the American Pilgrim Museum, De Pieterskerk and the place where William Brewster printed his pamphlets.