Can architecture solve the wicked problems of a city like Detroit? This year’s US entry for the Architecture Biennale in Venice would like us to think so. But the solutions offered seem wide of the mark.

Detroit has the dubious honor of being the symbol of the decline of America’s industrial cities. The issues of Detroit, once the country’s automotive capital and now dubbed ‘the capital of urban ruins’, have been decades in the making: the disintegration of the auto industry, white flight, a deep racial divide and a shrinking population which has gone from 2 million in the 1950’s to just 689,000 today. As in many American cities, the urban area is too big for the number of people that now live there, stretching service provision past the breaking point.
Decline has a strong esthetic appeal, going back as far as the 18th century’s fascinations with ruins and follies – and so does Detroit. Much against its will, the city has become the queen of ‘ruin porn’. Any number of photo books have appeared of houses with trees growing out the roofs and empty factories spilling their guts onto the pavement. 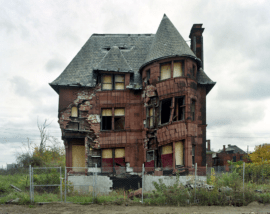 These images confront us with a disturbing urban dystopia which plays out not in some unnamed future, but as we speak. In her new book Beautiful Terrible Ruins: Detroit and the Anxiety of Decline (Rutgers University Press), Dora Apel, professor of art history and visual culture at Wayne State University, urges the reader to look past the images to what decline means for life in the city. ,,People’s rights are dependent on what they can offer to the state’s economic well-being, rather than vice-versa. The lost protection of the state means vastly inadequate living conditions in cities that are left to their own devices.”

The power of architecture
Can Detroit in all its distress serve as a model to show how ‘the power of architecture’ can help this and other cities to move forward? That is the premise of curators Cynthia Davidson and Monica Ponce de Leon of the American pavilion at the Venice Architecture Biennale this year, called ‘The Architectural Imagination’. From 250 submissions they selected twelve teams to create new ideas for four underutilized locations in the city: the former Packard Plant, the former Post Office, and vacant spaces in Mexicantown and the industrial Dequindre Cut area. “Architecture can catalyse change”, says Davidson. “But now it’ s not part of the discussion, because ‘architecture’ means building rather than thinking. These projects are not intended to be built, but to start a conversation.” They also organized a photo contest that everyone could participate in, and made 20 different postcards of the winning images. 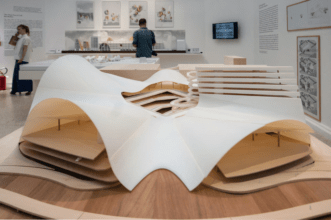 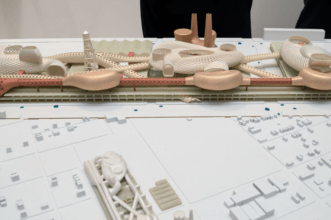 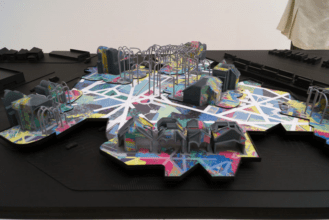 Swoopy blobs
It is difficult, however, to figure out which conversations these conceptual models are meant to start. How does it help Detroit’ s thinking about the old Packard plant to have Greg Lynn cover it in swoopy 3D printed tubes and blobs for a factory that builds robots? The idea of housing refugees in a skyscraper made of local wood is great – in a city that needs new buildings, not on one that has far too many underused buildings already. And what does Scott Preston-Cohen’s design with a huge undulating roof and intertwined ramps and staircases tell us about the future of the old Post Office?
All the designers say that local communities have been and will be involved. But not everyone agrees. Some Detroit residents formed a group called DetroitResists.org that wrote a manifesto against this approach to and by architecture. 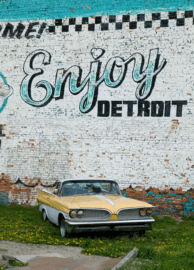 “‘The power of architecture’ might serve as simply another name for architecture’s political indifference,” the manifesto says. ,”We wonder who and what benefits from an idealization of ‘The Architectural Imagination’ at a time when architecture is being violently re-imagined by austerity politics. We fear that the US pavilion is structurally unable to engage this catastrophe and will thereby collaborate in the ongoing destruction of the city.” They also used the app Layar to digitally ‘occupy’ the pavilion, projecting for example a poster with the text ‘Respect Existence or Expect Resistance.’
Detroit needs big ideas, but relevant ones. Architecture as a tool for thinking, yes – but projects like these put the field at even greater risk of being seen as an elite playground, at the expense of those in desperate need of their expertise.

Cynthia Davidson and Mónica Ponce de León, Co-Curators of The Architectural Imagination, the exhibition of the U.S. Pavilion in the 2016 Venice Architecture Biennale, discuss the significance of Detroit to urban planning issues across the globe: