Even though the Pilgrims believed strongly in God’s providence, this question must have weighed heavy on their minds. What would it be like on the other side of the ocean? Would they survive the crossing? Could they afford it? In the end, only about fifty of the three hundred people who made up the Pilgrim community in Leiden in 1620 left for the New World. 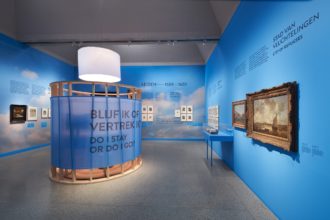 Misled
Getting a land grant from the English King was the easy part. In 1619 they received permission from King James I to settle in Virginia. Although he considered the Pilgrims to be traitors, having them as far away from England as possible was probably for the best.

The unconditional trust the Pilgrims had in God’s will did not always work in their favor. They got misled by the Merchant Adventurers, a group of investors who financed their trip. For the first seven years in the New World, the Pilgrims were supposed to work four days a week to pay off their debt. Two weekdays could be spent working for themselves. After this time period, they would be their own masters and the houses and the surrounding land would become theirs alone. But right before they left, the deal changed: four days of work for their investors turned into six, and after seven years, the Merchant Adventurers would remain part-owners of the houses the Pilgrims built. Apparently, liberty came with a price.

Family separation
And the price for freedom kept rising. In order to save money, the Merchant Adventurers decided to make room for paying customers from England and also added a group of misfits the English were happy to get rid of. Less space meant the Pilgrims had to make some difficult choices: who should go? Who would stay? Families split up, the youngest and weakest were left behind. Most of them would never see each other again.

A rocky start
In July 1620, the Pilgrims left Leiden for Delfshaven, a small harbor near Rotterdam, where they boarded the Speedwell, the boat that was purchased to sail alongside the Mayflower to America. This scene is supposedly portrayed in a painting by Adam Willaerts. After arriving in Southampton, where the other passengers boarded, both the Speedwell and the Mayflower set sail, only to return to the English coast three days later. The Speedwell was leaking uncontrollably, which happened again after a second try. They had no choice but to abandon the ship and cram into the already packed Mayflower. Some travelers, including some of the Pilgrims, decided to abandon the ordeal and stay behind. 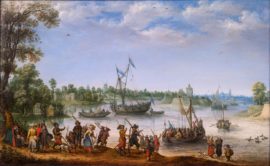 The Departure of the Pilgrims from Delfshaven, by Adam Willaerts

Myth of the Mayflower Compact
The ten-week trip was extremely uncomfortable. The delays, bad weather, and poor navigation caused the ship to arrive in winter time instead of summer and at the wrong place: on 11 November 1620, the Mayflower anchored near Cape Cod, Massachusetts instead of reaching the coast of Virginia. After a failed attempt to sail further south, they settled for what would become the coast of New England. The passengers other than the Pilgrims saw an opportunity to get out of the arrangements: “They would use their own liberty; for none had power to command them, since they would not be settling in the agreed-upon Virginia territory.” The Pilgrims feared the new colony was doomed if they did not stick together.

Enter the Mayflower Compact. This agreement, signed by 41 of the male passengers, settled the terms of self-government for the colony which basically held the group together. The document was – and still is – often cited as the first democratic experiment on American soil, and a precursor of the U.S. Constitution. 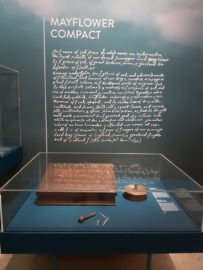 Text of the Mayflower Compact

But that’s a myth. The Pilgrims did not aspire to a democracy, they just did what was needed for their ‘holy experiment’ to succeed. As the Compact stated, everything was “for the glory of God and the advancement of the Christian faith.” Did the Compact inspire the writers of the Constitution? Perhaps. But free exercise of religion for all as laid out in the First Amendment? The Pilgrims would have been horrified.

Next week: How the indigenous people paid the price for the Pilgrims’ newly found freedom

The exhibition ‘Pilgrims to America – and the Limits of Freedom’ is part of Leiden400, a commemoration of the 400th anniversary of the sailing of the Mayflower. It highlights not only the story of the Pilgrims but the cultures and places they came into contact with as well. Part of the program is a city walk which leads visitors along sites connected to the Pilgrims, like the American Pilgrim Museum and the Pilgrim Fathers Monument De Vliet.