BirdScore is a collaboration between American musician/artist Michael Pestel and Dutch visual artist Jeroen van Westen: an interactive set of multi-media installations, a choreographed/scored performance work, interlocking indoor and outdoor, and a strategy for local environmental research and interspecies communication with birds. The title refers to the counting or ‘keeping score’ involved in birdwatching, but also to the various musical scores derived from listening to and performing with birds. From September 30 – December 2, 2018 by Zone2Source in and outside the Glazen Huis at Amstelpark, Amsterdam. 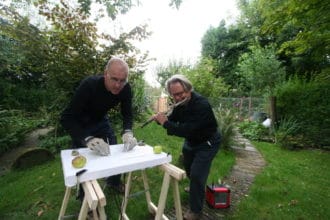 Artist and musician Michael Pestel has built large-scale, architectural sculpture, multi-media installations, and has performed on diverse woodwinds and invented instruments, such as the Birdmachine, Violaire, Clarineticut, Broominette, and Pianotable, in concert halls, art galleries, aviaries and natural places throughout the world. His focus on bird sound over the past twenty years extends twentieth century French composer Olivier Messiaen’s Catalogue des Oiseaux into the realm of live performance with birds. An account of Pestel’s many years performing at Pittsburgh’s National Aviary are celebrated in David Rothenberg’s book Why Birds Sing and in a 2007 BBC documentary with the same title.