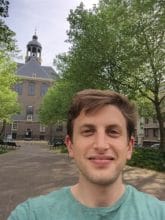 Hello again, readers! Thanks to those of you who are back for Round 2. Newcomers—welcome. It’s hard to believe, but I’ve now been living in Amsterdam for a month.

Everyone needs a bit of personal space from time to time. But ultimately, we’re social creatures—we thrive when we engage regularly with others, and we’re gloomy when we feel isolated.

The design of our neighborhoods exerts a powerful influence on our ability to connect with the people around us. Some approaches facilitate contact and encourage relationships. Others set the stage for separation, anonymity, and even hostility.

I’ve been thinking about this topic a lot recently, as my neighborhood in Amsterdam has a totally different social dynamic than my former neighborhoods in Washington, D.C. The main difference? The balance between public and private space.

Most of the housing in my Amsterdam neighborhood (Oost) consists of multi-unit, walk-up apartment buildings. Individual units are pretty small—if you need some extra room, you simply have to leave the house. Fortunately, there is a large, spectacular park immediately adjacent to my building, which functions as the entire neighborhood’s gathering place. And thanks to a consistent mixed-use approach to zoning, there are plenty of “third spaces”—cafes, restaurants, and bars—within a few blocks of my front door.

Washington’s residential landscape is changing rapidly, but for the most part, it is still dominated by single-unit row homes. These houses offer large living and dining spaces and a significant amount of semi-private outdoor space, in the form of patios or backyards. With so much room, it’s easy to feel like you never need to leave. If you do decide to venture out in public, cafes and restaurants are generally confined to specific commercial strips. It practically goes without saying that public space is hard to come by.

These different housing and neighborhood dynamics manifest themselves powerfully in community life. In Amsterdam, the people in my building seem to know each other much better than my neighbors did in Washington, D.C. Here, whether you like it or not, you see each other all the time—in the stairwell, in the park, at the café across the street, at the grocery store down the block, etc. Nearby businesses are frequented almost entirely by people who live in the surrounding area, creating a distinct feeling of neighborhood ownership. This encourages a certain level of familiarity with the people around you, and perhaps even a degree of trust. The result is palpable.

In Washington, there are drastically fewer opportunities for this kind of consistent, casual interaction. Sure, you say hello to your neighbors if they are sitting out on their front patio, but for the most part, people stay within the bounds of their private space. If you want to interact with your neighbors, you have to make a conscious effort. And because commercial strips are more condensed and public parks are rare, these spaces often feel less intimate, catering to an ever-changing cast of strangers rather than a relatively consistent group of neighbors.

Thinking about these differences, I’m struck by the extent to which the United States has built itself up to maximize private space. The suburbs are of course the most dramatic example of this, but housing and neighborhood design in our cities often reflects similar values—namely, that public space takes a back seat to private space, and that residential areas should mostly be separated from commercial activity. The end result? An atmosphere that creates distance between neighbors, inhibits spontaneity, and makes mutual trust more difficult to achieve.

Obviously, having regular and pleasant interactions with your neighbors is not enough to guarantee happiness. But I’d argue that a key component of happiness is having a rich social network, and that casual interactions between neighbors can set the stage for more satisfying interpersonal connection.

If we recognize that certain approaches to housing and community design can encourage positive social bonds, what’s stopping us from building more neighborhoods with these qualities? Of course, making radical changes to the built environment is no easy task. But in theory, if the demand is there, it will happen. Ultimately, the question for American city dwellers will be this—how much privacy are you willing to leave behind?

Ross Tilchin is a visiting fellow at the Amsterdam Institute for Social Science Research and a member of the strategy team at the Amsterdam Economic Board. Before arriving in Amsterdam, Ross worked as a researcher at the Brookings Institution, a nonprofit research organization in Washington, D.C., where he specialized in urban economic development and a wide range of issues related to cities. You can read his first blog here.