“John Brown’s body lies moldering in the grave,
While weep the sons of bondage whom he ventured all to save;
But tho he lost his life while struggling for the slave,
His soul is marching on.”

For people either very much against or in favor of slavery, the question whether John Brown was a hero or a villain must have been easy to answer. While Union soldiers marched to the tune of the song dedicated to Brown, many in the South viewed him as a criminal and a madman, or someone we might nowadays call a domestic terrorist. For people in the middle, he was a little bit of both, as this quote by Abraham Lincoln seems to indicate: “Old John Brown has just been executed for treason against the state. We cannot object, even though he agreed with us in thinking slavery wrong.” 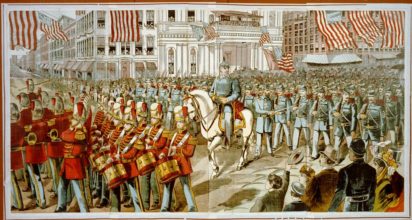 But the different views of John Brown and his fellow raiders did not end there. They also become apparent when we look at how they were treated after their arrest and even in death. While many abolitionists pleaded for the release of Brown, they did not ask for the freedom of the two black raiders who were captured. These black men were hanged separately from their white fellow raiders, and while all convicts had asked to be buried in a free state, only their request was dismissed. Instead, their bodies were hastily buried in Virginia, only to be dug up by medical students for dissection. 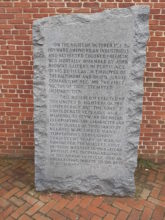 Things get even more topsy-turvy when we look at the case of Heyward Shepard, the free black man who was – presumably accidentally – shot and killed by John Brown’s men. In 1931, a monument was erected for Shepard by – of all people – the United Daughters of the Confederacy, claiming it to be a symbol of faithful black people who did not join the raid or believed in its purpose. Besides the fact that we have no idea what Shepard’s thoughts on the raid might have been, the monument feels more like a bad PR-stunt to defend the lost cause of the South. It’s still there, although it seems to go unnoticed by most visitors to Harpers Ferry. 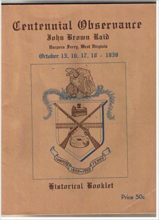 Even in this day and age, people still seem to have mixed feelings about John Brown’s actions. At the raid’s centennial in 1959, the reenacted capture of Brown was met with wild cheers from the crowd. The black raiders did not play any part in the ‘festivities’. Under President Barack Obama, things changed, and descendants of both the black and white raiders were invited to attend a commemoration. Some called upon the President to posthumously pardon John Brown. In 1965, Malcolm X uttered the following: “If you are for me and my problems – when I say me, I mean us, our people – then you have to be willing to do as old John Brown did.” Oklahoma City bomber Timothy McVeigh once cited Brown as an inspiration.

So what should we make of John Brown? Was he a liberator, a murderer, inspired, radicalized, sane or mad? It’s an ongoing debate. What we can say, is that when it comes to John Brown’s raid on Harpers Ferry, nothing is black and white. 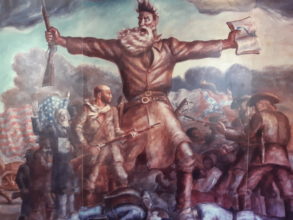