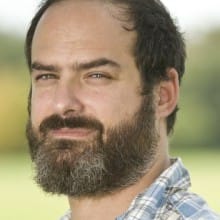 The John Adams Institute proudly announced Neal Pollack as our guest at the National Poetry Day Amsterdam, on January 30, 2003. He also performed as a special guest with the Boom Chicago crew on January 31, 2003.

Neal Pollack has worked as a journalist for the ‘Chicago Reader’. He gave it all up and started to be a full-time writer, poet and stand-up comedian. He has written his first book The Neal Pollack Anthology of American Literature, in which, ‘through his fictional, eponymous alter ego, he ruthlessly satirizes the larger-than-life writers of years past, taking shots at seemingly every journalistic and literary form with tongue lodged firmly in cheek.’ (Matt Herlihy, The Art of Chicago). Firmly in charge, true to his convictions and with the help of Mc’Sweeney’s, Neal Pollack chose the rather unconventional way of promoting his book by himself by travelling the United States in his car and talking to people in bookstores, café’s, parks, on beaches and other unusual venues. Since then, Neal has gained a reputation in the United States, writing for The New York Times, Vanity Fair, and other magazines, and published his first novel, a satirical history of rock music called Never Mind the Pollacks, in the fall of 2013.

A collection of highlights from the The Neal Pollack Anthology of American Literature have been published in the Netherlands by Vassallucci under the title Neal Pollack’s Eternal Love for the Good People of Holland (and also Belgium).

In collaboration with: Boom Chicago