Shelter in place, they ordered. Stay home, they said.

Tonight I have neighbors for a change. I’m new on the block. I parked my van next to a family along the Pacific Coast Highway, half an hour west of Los Angeles. The stuffed garbage bags outside their beat-up car indicate that they’ve been living here for a while.

I actually have dozens of neighbors tonight, because it’s quite a good spot. There are no “NO OVERNIGHT PARKING” signs, so it appears that car and van dwellers are relatively free from harassment by police and security. And of course there’s the luxury of a porta potti on a parking spot a few hundred feet away which, according to the schedule on the door, is supposed to get emptied and cleaned once a week. 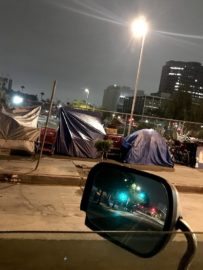 Yet even adding the Californian sunshine, and seeing and hearing the waves of the Pacific crash onto Malibu beach, I can’t stave off the sadness that sweeps over me every time I see people forced to live in their cars and on the streets – an inescapable observation in my daily life as a foreign journalist living in a van in this country. Official numbers say that there are half a million unhoused in the US. According to other estimates it is more in the range of two million.

I’m fortunate I’m not forced to live in a van. I chose to because I planned to travel across the United States for a year to follow the Bernie Sanders campaign. Then came the pandemic and all events were cancelled. After Bernie dropped out, my gaze broadened further still.

Slowly making my way up north along the West Coast, I immerse myself in Howard Zinn’s classic A People’s History of the United States. Zinn was an influential American historian and this is his most famous work. First published in 1980, it sold over a million copies and has seen many updated editions since. It is considered a classic because it provided a new take on American history, from the arrival of Columbus in 1492 to the 2000 election and the ‘War on Terrorism’. The phenomena the book highlights, such as rising inequality and militarization, have become only more pronounced over time.

During its rise as a global empire, the United States, “finding itself possessed of enormous wealth, could create the richest ruling class in history,” writes Zinn, “and still have enough for the middle classes to act as a buffer between the rich and the dispossessed.”

The homeless, they’re often labeled. The unhoused, they’re occasionally termed. When asked, they sometimes refer to themselves as the outdoorsy. Like Allen, an outdoorsy guy I met on a parking lot in Las Vegas. With or without a pandemic, they don’t have a home to stay safe in.

Hundreds of thousands of people have been living on the streets of the richest country in the history of the world for years. They end up in the streets for all kinds of reasons. Some because of mental illnesses and disabilities – eleven per cent of the unhoused are veterans – for which they can’t get help because they’re uninsured. As Theo Henderson, currently unhoused and residing in LA, tells in his podcast We The Unhoused: “I did not one day wake up and decide to live out on the street. I was working as an educator, and I had a diabetic coma. It happened at the most inopportune time, during the 2008 Great Recession.”

Many of the unhoused work full-time jobs, but still have to live in their cars or tents because they simply cannot afford to pay rent. The pre-pandemic ‘booming economy’ has caused rents to rise astronomically. Considering that at least twenty-two million people lost their job in the past four weeks, homelessness is bound to rise rapidly – unless people go on rent strike.

Data shows homeless communities and people of color are two to three times as likely to die from COVID-19. The middle and upper classes complain that life under lockdown is horrendous, that they want to go to bars, restaurants and shopping malls again. Meanwhile images from New York City show the working class, predominantly black and brown, crammed into subways during rush hour (not even six inches apart), because the lowest-paid jobs, the cleaners and janitors and Wal-Mart employees, can’t be done remotely. 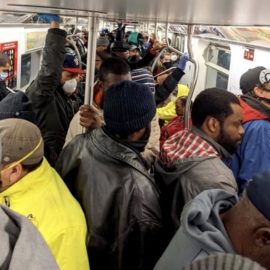 Are all men created equal?

All men are created equal, they wrote.

COVID-19 has prompted authorities to address the homelessness crisis that has been sweeping across the US for decades. One might applaud the efforts to house the unhoused in hotels. But for whose sake? And so by extension: for how long?

I’m not getting my hopes up. This country started out as a series of colonial business enterprises – not a noble democratic experiment, as is generally claimed. A highly stratified class society quickly developed. This balance of power in favor of wealthy elites was firmly established long before the American Revolution of 1776 took place and the Constitution was written. The Constitution merely institutionalized and consolidated the power of the economic and political elites.

“The Constitution was a compromise between slaveholding interests of the South and moneyed interests of the North,” Zinn explains. It solidified the injustice and systemic violence already pervasive in the empire. “Four groups were not represented in the Constitutional Convention: slaves, indentured servants, women, men without property. And so the Constitution did not reflect the interests of those groups,” Zinn points out. But now everyone can vote, right? Zinn: “If some people had great wealth and great influence; if they had the land, the money, the newspapers, the church, the educational system – how could voting, however broad, cut into such power?”

Millions across the country are concluding that it is not enough to rely on the electoral component of democracy. People are rising up. In California calls for rent and debt strikes are becoming louder and louder. In Los Angeles people are demanding “Homes not hotels”. Since the start of the pandemic, dozens of unhoused families have taken over state-owned houses that have long stood vacant, and more continue to do so every single day. 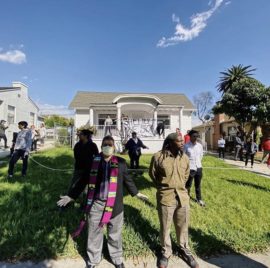 Workplace strikes, rent strikes, debt strikes: throughout history, strikes were one of the only ways the working class and dispossessed have ever been able to gain political power and drive societal progress. This pandemic has made very clear that it is the working class that creates value in the economy; when they don’t go to work, the economy collapses. And they’re becoming aware of their power. More and more strikes are hitting corporations across the country. On May 1, nationwide rent and workplace strikes are being organized.

Something’s rumbling among the dispossessed.

Sjors Roeters (1991) is a journalist focusing on the influence of economics and tech on society.