Thirteen years after, I was born, in 1976. The myth was then already debunked, and thus the Kennedy saga unfolded to me in a different order than to the generation of my parents: not the dream first and then the wake-up call, but vice versa. The Kennedy I got to know was a wandering opportunist who once, long ago, had enchanted America. It is likely that JFK would have been remembered as a disastrous president if those terrible events at Dealey Plaza had not happened.

I saw the first real outline of JFK, the person, the character, after readingThe Dark Side of Camelot, the controversial book by Seymour Hersh that was published in 1997. Hersh filled in the blanks in the already known dark side of Camelot: how father Kennedy bought election victory in 1960 for his son, how Kennedy himself prolonged the war in Vietnam out of pure political opportunism. Writing about a concealed marriage and a host of venereal diseases: Hersh burned the Kennedy court down to the fundamentals.

Seymour Hersh was – in a slightly different scale – a legend himself. I wanted to become such a good journalist as well, and I wanted to believe him. In my mind, JFK behaved almost the same as Nixon. JFK’s youngest brother Edward Kennedy criticized the book as malicious slander. Hersh had no evidence for all his claims indeed, but the core of the book was solid.

Ten years later I went to live in Washington. Obama was about to be elected. The Kennedy brand proved to be like Teflon: the Kennedy brand had survived all the scandals. During a joint election rally at the American University in Washington, Edward Kennedy passed the torch to Obama. The eloquence, the youth, ideals: Obama deserved an official stamp of approval from America’s only royal family. Also on stage was Caroline Kennedy, JFK’s daughter. Recently she was named ambassador to Tokyo by Obama. She doesn’t have any special rhetorical gifts and this received frowned eyebrows here and there. But Caroline’s a Kennedy – the brand reaches deep into Asia. 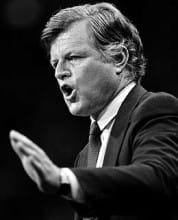 Kennedy’s youngest brother died in the summer of 2009. My sister was visiting me at that time. Together we stopped at his office in the Russell Building, right behind the Capitol. A mini pilgrimage through the stately halls of Congress. We stopped at room SR -317: Senator Edward M. Kennedy, Massachusetts. Inside we signed a condolence register. Weeks later there we received a beautiful envelope in the mail, including a full-color photograph of Edward Kennedy at his very best. “Thanks for your compassion – The Kennedy Family.”

That same summer I sailed on a boat along the coast of Rhode Island. ‘That’s where John and Jackie were married,’ said the skipper, pointing to a villa by the water, and we took pictures. Later that year I went to visit Dealey Plaza for the first time.

The images from Dallas still make a deep impression. Meanwhile – as we commemorate the 50th anniversary of the assassination of Kennedy – the man who took over the torch is losing prestige every day. Even though Obama is – again, like Kennedy – sometimes obsessively concerned with his appearance: his place in history must be secured. It’s, now in the fifth year of his presidency, a burden on his shoulders.

Kennedy’s death was terrible, but the brand was saved by it.