It was a little before sunset when the sign ‘Last Free Place on Earth’ welcomed us to Slab City. Abel drove up in his ragged pick up truck and the unmistakable aroma of marijuana to drop off the keys. Our home for the night was a gutted-out RV in the southern California desert, one of two that Abel and his wife rented out to make some extra bucks. “Do you want a tour? Hop on in!”

We pass Salvation Mountain – a handmade mountain dedicated to Jesus that artist Leonard Knight gave twenty years of his life to build. We sail past empty barracks, skillfully covered in graffiti and construction of waste transformed into pieces of art. “Is this a great place to life or what?” Abel cheers. He and his family are some of the few permanent residents of Slab City, a snowbird community in the Southern California dessert. Several thousand campers use the site during the winter months. ‘When the hornets arrive, it’s time to go. To darned hot,’ one of them explained on his way out late March. 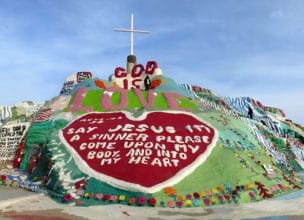 I asked Abel how his family survives summer. “We lay under wet blankets all day and come alive at night. We adjust.” Leaving is not an option: the earthship he and his wife have built carefully over the years would most likely be squatted and leave them with nothing. It’s the downside of living in a community where government is absent. Hobo’s, beggars and addicts are as much part of the community as the RV-snowbirds and the permanent residents. But that lack of control is also what draws people to Slab City: no rules, no laws, no schools, no taxes; an alternative living community away from the norms and demands of society.

It has been four years since they arrived here from Colorado. Abel lost his job a couple of months after his wife Cherry did. They struggled to keep up with the bills and the requirements of city life. “We wanted to be free, just break out of it,” Abel explains, sitting outside the family earthship underneath a shed. They sold what they had no need of, packed up their four kids (2, 6, 8 and 10 at the time) and their leftover belongings and drove off to Slab City. Two years later, their fifth kid was born: a true ‘slabber’. All of them are homeschooled. “There is one other family with kids but we don’t really hang out,” their oldest daughter says. “Do you ever miss Colorado?” I ask. “I don’t know,” she answers and walks off. 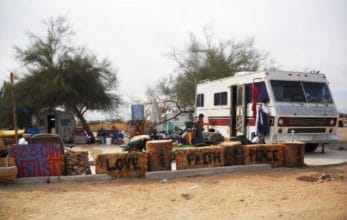 There are many places like Slab City in the southwest of the States. Desolate spots where people go to be left alone and escape society. Some of them choose consciously to live off the grid. Some choose the desert sun just for winter. But most of the communities I visited over the year are filled with stories of people falling behind. The one thing they are truly free of is the fear to lose it all. That all American reality lingering somewhere around the corner only one lay off, unexpected hospital bill, divorce or a bad turn of events away. They have been there. Then they gathered what was left of their lives and drove off to Slab City or places alike.

On our way out, the irony of the welcoming sign we passed strikes me again. The Last Free Place on Earth is a sanctuary for those who have the liberty to leave if they choose. But if you don’t have a choice, you are captured in a phrase that promises freedom but gives you life. 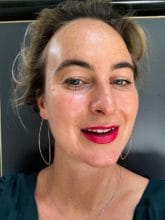