After a harrowing journey, the Pilgrims had finally reached the Promised Land and found their freedom. But what about the freedom of the people who were already there? 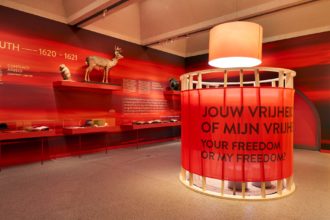 Land for grabs
The New England coast might have appeared abandoned at first. Earlier European visitors transmitted numerous diseases that ravaged the Native American communities. Between 1616 and 1619, ninety percent of the original inhabitants of the coastal region had either died or fled. Still, the Pilgrims were aware of native tribes inhabiting the land. But because the way the indigenous people lived was so foreign to them, they considered the land to be ‘unpeopled’ and unused. The Pilgrims took it as a sign from God: the land was theirs to take.

Mutual interests
Still, based on mutual interests, the Pilgrims and the local Wampanoag people developed a relative friendly relationship at first. The Pilgrims were clueless on how to get the colony started. As almost half of the Mayflower passengers had died by the spring of 1621, they were in sore need of help. The Wampanoag on the other hand were looking for allies against other hostile native tribes. This agreement might have been the origin of the so-called first Thanksgiving celebration. 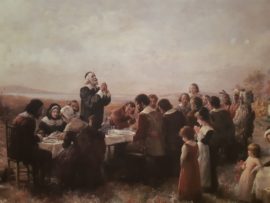 Thanksgiving 1621
The popular story of the first harvest festival in 1621, with Pilgrims and Native Americans joyfully coming together to give thanks and share food, came to lead a life of its own. But the exact origin for the present-day feast is hard to pinpoint. Sources tell us of Thanksgiving celebrations in Virginia as early as 1619. But whatever the true nature of the 1621 edition (some say the Wampanoag joined primarily for diplomatic reasons), in 1637 Thanksgiving took on a whole different meaning.

Massacre
The relationship between the Pilgrims and the native tribes had not been without conflict, but as the influx of colonists increased, so did the competition over land and trade. Confrontations became more frequent and more violent. In 1637, a series of incidents led an alliance of colonists (including some native tribes) to burn a village of the Pequot tribe, killing hundreds of men, women, and children. The ones who didn’t die in the fire were ambushed and shot. This became known as the Mystic Massacre.

‘Sweet Sacrifice’
As far as we know, the Pilgrims did not participate in the attack. Although the brutality of the attack rattled him, Governor and Pilgrim William Bradford seems to have been pleased with the outcome. In his History of Plimoth Plantation he writes: “The victory seemed a sweet sacrifice, and they gave the prayers thereof to God, who had wrought so wonderfully for them, thus to inclose their enemies in their hands, and give them so speedy a victory.” Governor John Winthrop of the Massachusetts Bay Colony, which was founded in 1628, proclaimed an official Day of Thanksgiving to commemorate the battle. 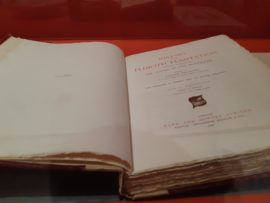 Day of Mourning
There would be more massacres and many wars. The American colonies expanded, while the native tribes were deprived of their land and their freedom. It would be oversimplified to directly blame the Pilgrims for the demise of the indigenous people, but they did play their part. It is therefore not surprising that the Native Americans of New England chose to regard Thanksgiving Day as a Day of Mourning instead.

The ultimate price
The National Day of Mourning originated in 1970 when Wampanoag leader Wamsutta was invited to make a speech in Plymouth on the 350th anniversary of the Pilgrim’s arrival. But when the organization found out that he intended to use his speech to address the tragic fate of the native tribes, they did not let him speak. So instead, he and his supporters gathered elsewhere. While overlooking Plymouth Harbor and the Mayflower replica, Wamsutta gave his original speech. This would become the location of a yearly manifestation honoring native ancestors and the struggles of native peoples to survive today. In the end, it was they who paid the ultimate price for other people’s freedom. 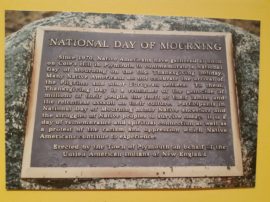 This was the last blog of the blog series ‘The Pilgrim Fathers: The Price of Liberty’. Click here for part one and two.

The exhibition ‘Pilgrims to America – and the Limits of Freedom’ is part of Leiden400, a commemoration of the 400th anniversary of the sailing of the Mayflower. It highlights not only the story of the Pilgrims but the cultures and places they came into contact with as well. ‘First Americans’ at Museum Volkenkunde in Leiden showcases contemporary indigenous lives, art and politics in North America.