On June 5, 1994, the John Adams Institute hosted an afternoon with writer and cartoonist Art Spiegelman. The event was moderated by Johannes van Dam, Joost Swarte, and Louis Tas. 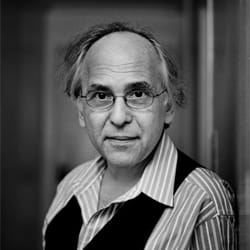 The use of a “comic” to describe the horrors of the Holocaust seems incongruous to say the least. Yet this is precisely what writer and cartoonist Art Spiegelman did in his two Maus books. Spiegelman, the son of Polish-Jewish death-camp survivors, grew up in New York and published the first of his many cartoons as early as 1962. Maus centers on the Spiegelman family’s fate at the hand of the Nazi’s, as told by Spiegelman’s father, Vladek. The Nazi’s are depicted as cats and the persecuted Jews as mice. Based on Vladek Spiegelman’s tape-recorded memories, this narrative is presented in a form that Spiegelman prefers to spell “comix” to signify both that it consists of a comix of words and pictures and that what is portrayed is not necessarily funny. Although the tension between the medium and the content offended some readers, most critics applauded the start poignancy of this Pulitzer Prize-winning work. Maus I was published in 1986. It was followed five years later by the second and concluding volume. After the events of 9/11, he published the cartoon/novel In the Shadow of No Towers. 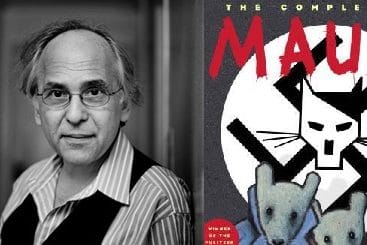