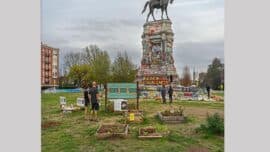 Empty Pedestals    |   By Brian Rose
Not long after I photographed Monument Avenue, the city announced that it was taking down all of the Confederate memorials, and in November of 2020 I returned to Monument Avenue to photograph the empty pedestals. The Jefferson Davis pavilion remained […] April 21, 2022 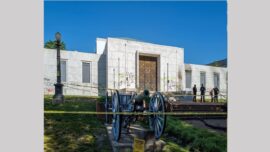 Rumors of War    |   By Brian Rose
A few nights before I arrived in Richmond, protesters set fire to the headquarters of the United Daughters of the Confederacy (UDC), just a few blocks off Monument Avenue. No other organization was more responsible for the placement of Confederate […] April 14, 2022 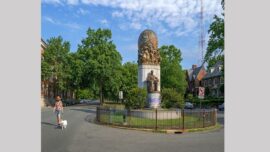 Pathfinder of the Seas and a Tennis Champion    |   By Brian Rose
The most prominent statues along Monument Avenue depicted Confederate generals on horseback, heroic battlefield leaders, perched on pedestals high above the heads of onlookers. An exception was the memorial to Matthew Fontaine Maury, a naval officer, who was nicknamed Pathfinder […] April 7, 2022 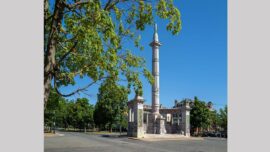 Goddess of Vindication    |   By Brian Rose
Monument Avenue was built as an extension of the city of Richmond in the late 19th century, and like many such projects, was at heart a real estate venture. But it was also an expression of the city beautiful movement […] March 31, 2022 Grand Boulevard of the Lost Cause    |   By Brian Rose
The first wave of the Covid-19 pandemic crested in New York in the spring of 2020 when the eerie calm of the lockdown was broken by the news of the police killing of George Floyd in Minneapolis. Protesters flooded into […] March 24, 2022