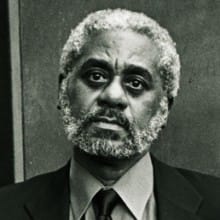 He is an American author of novels, short stories, screen-and-teleplays, and essays, mostly focused on philosophy. Johnson has addressed the issues of black life in America in novels such as Dreamer and Middle Passage, which won the U.S. National Book Award for Fiction in 1990. Starting his career as a cartoonist, he later got a Bachelors Degree in Journalism, a Masters degree in Philosophy and a PhD in Philosophy. Recently retired, Johnson was previously the S. Wilson and Grace M. Pollock Endowed Professor of English at the University of Washington.
Johnson’s novels contain a diverse range of characters who constantly examine and reexamine the nature of self, and are continually confronted by central philosophical dilemma’s. Nothing is certain in Johnson’s world and his characters struggle incessantly, trying to find a black role in a white society, trying to define their own identity or America herself.
“The middle passage” (an idea which occurs in Johnsons’ books) marks a period of time in the lives of the heroes when the past and the future have little or no significance. Only the immediate present matters and it is then, in moments of crisis and stress, that the characters having to face the question “Who am I?”, come to understand most about themselves and learn to come to terms with their environment and social surroundings. This confrontation with the question of black identity in America is at the heart of all Johnson’s prose.