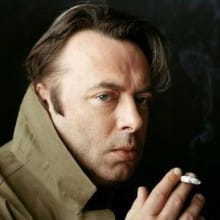 He dismisses Hillary Clinton as “an aging and resentful female” and, regarding Barack Obama, he asks, “why is a man with a white mother considered to be ‘black,’ anyway?” Christopher Hitchens is one of America’s most provocative public intellectuals. In his book, God Is Not Great – a runaway bestseller in the U.S. – Hitchens goes after organized religion with both barrels blazing. Why is the West in such a heightened state of insecurity? Hitchens gives a three-word answer: “Religion poisons everything.” And if all religions are dangerous, Islam, he says, is the biggest threat because “it’s unalterable.”

Christopher Hitchens died in 2011 from esophageal cancer at the age of 62. Read his Vanity Fair memoriam here.

One thought on “Christopher Hitchens”