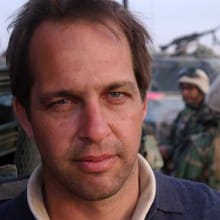 In The Forever War, Dexter Filkins – one of America’s top war correspondents – has produced a book of scintillating beauty, if one can apply such a term to the nightmare that has unfolded in Afghanistan and Iraq. How to sort through the lies, the bombs, the billions of dollars, the thousands of deaths? Filkins stays close to the ground. He tells stories. He bears witness. He knows which details hold meaning. “His writing,” says novelist Robert Stone, “is one of the scant good things to come out of the war.”