Dutch journalist Arjen van Veelen didn’t plan on moving to the U.S.—but after his wife accepted a job in St. Louis in the summer of 2014, he found himself coincidentally in the backyard of the Ferguson riots. With that, he began to research and write about his American experience, reporting back to a fascinated Dutch audience on life in the heartland. These experiences are now brought together in his book Americanen Lopen Niet (Americans Don’t Walk), published by the online news platform De Correspondent. 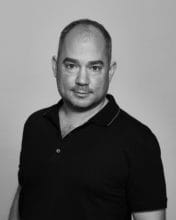 The America that you witnessed firsthand was not at all what you expected.

The first day we drove to the university where my wife worked, we were shocked by the racial and economic divide of the city. We were driving through St. Louis, and when we crossed from one street to the next, both the cityscape and the people we saw walking there completely changed: from almost entirely black to almost entirely white, from completely deteriorating buildings to big mansions with shiny cars.

It was a shock, maybe because I was quite naïve. My view of the United States was based on what I saw on Dutch television which, like American television, tends to focus on the big coastal cities and tourist places. It was also quite shocking to see young children begging in the streets. That was new for me, I thought it was something from the past.

The media left after the protests, but I was still fascinated by this strange city that I had never heard of before moving there. I began to explore St. Louis and found that the root causes of the protests were more shocking than the riots themselves.

What did you find shocking?

In the book there are basically two storylines: one is me trying to understand what I saw during the protests, with the people out on the streets and the teargas, which I didn’t understand at all at the time. Then, a year or so later, the presidential election started, and Trump comes into the picture and there’s another kind of uprising. Not street protests, but voters are angry, and I try to understand why. And it’s also from this quite naïve point of view, that I’m shocked by what I see in the country as well, all the small towns and all the main streets that are no longer flourishing. In the end, I’m asking the question which is still being asked in the Netherlands: is it the identity or is it the economy?

St. Louis is a perfect case study for this question, because it’s both. It’s two forces that work together. If you want to understand the United States, you shouldn’t go to New York City or L.A., but St. Louis. I think of it as the capital of the Heartland. In the 19th century there was even a movement to make St. Louis the capital of the United States, instead of Washington D.C., which made sense at that time, right after the Louisiana Purchase.

But to be clear, this is a personal book, it’s not investigative journalism. I literally walk through this strange city and write about what I see, what shocks me, and then I try to understand what I have seen through research.

How do you think being Dutch affects your perspective?

Growing up in the Netherlands, you’re immersed in American culture. We watch American television and follow American news very closely. We probably even watch the presidential elections with more attention than Americans themselves! On the one hand we follow every step of the U.S. very closely, but on the other hand our view is very limited because we are focused on the big coastal cities like New York and L.A., and on tourist things like Route 66. We ignore a lot of the country. That’s one of the reasons why I was shocked: there was so much difference between what I thought I knew and what I saw.

What do you think was the harshest lesson for your naïveté?

At first, during the protests in Ferguson, there were things like shootings and teargas, which were new for me, I’d never been in that kind of situation before. But the most shocking thing was rather how normal the divide was. During the protests, everybody was talking about when the “normal” situation will return, but the normal situation was quite extreme for a lot of people. What was shocking to me was how quickly you accept a situation.

When I returned to the Netherlands, I saw the same trends, though maybe less extreme. The Netherlands is still a welfare state in many ways, there’s a much stronger safety net, but seeing the same trends worried me. I don’t want this to be a book about how terrible everything is in the United States, because in  Europe we have the same trends. We have our own share of populism, for example. Trump is not the root of all evil, he’s just a symptom. The lesson I learned is to readjust the issue from Trump to structural issues.

Did you see anything to make you optimistic? 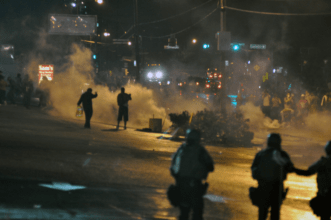 The inspiring thing about living in St. Louis is that people know how to protest. They were already protesting under Obama, not against Obama but against the system. I find those people to be very inspiring, they show how to confront fundamental and structural issues. That’s also a take-home message of my book: if you’re worried about the current situation and want to do something, then look at the people who were protesting already. You don’t have to accept the situation as normal.

Another inspiring thing I saw is that, wherever you go, the most rundown places are also where you find people who are the most resilient; they know how to survive. They are strong and creative, and they’re optimistic. I don’t know if it’s an American trait, but it can be a very beautiful thing to see all those rundown places in Missouri and in the country, and you always meet people who are very proud and strong and optimistic. At first I thought it was just a façade, just a way to cope, but it’s not.

What do you most hope your Dutch audience will get out of your book?

That they stop focusing so much on the current president and try to understand the more abstract economic and social forces that created this situation. But also that they understand that those same forces—whatever labels you want to give them, like neo-Nazi, neoliberalism or whatever—are also happening in Europe. So, the book is set in the U.S., but it’s not only about the States.

Tell us about the title, ‘Americans Don’t Walk’. 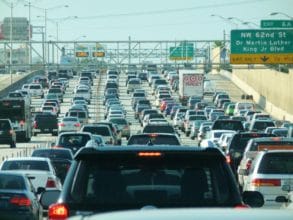 When I first arrived, I didn’t walk, because people warned me that it wasn’t safe. My legs started to feel funny because I wasn’t walking at all. After a few weeks though, I realized I had to walk to explore and get to know my surroundings, so I walked.

There is the big cliché here that Americans don’t walk anywhere because they’re all car lovers or just lazy. But one of the things I learned is that a lot of Americans do walk. In St. Louis, I think 1/4 of the population doesn’t have access to a car. This is not because they want to live car free, but mostly because they can’t afford one. And this is a city where the public transportation isn’t very developed: only about 1/3 of the jobs in the metro area are accessible by public transport. So a lot of them walk—very long distances every day, along busy streets without sidewalks, crossing highways, facing all kinds of hazards—to get to work.

And, they walk to protest. There’s a joke that if you see an American walking, he’s either protesting or walking to his car. During the Ferguson protests, there were a lot of people walking in St. Louis, just marching and marching. So, for many reasons, walking is political.

On July 4th, Arjen van Veelen will contribute a column to the evening the John Adams Institute is organizing with Princeton sociologist Matt Desmond about his book ‘Evicted: Poverty and Profit in the American City’: https://www.john-adams.nl/matthew-desmond/ In the coming weeks, the John Adams will post an interview with Desmond, three blogs from Van Veelen’s book and a blog by Lize Geurts about the exhibition on ‘Evicted’ which is currently on view in the National Building Museum in Washington DC.