London— what a city. I just visited for the first time and absolutely loved it. The place has an unbelievable energy running through it, so much variety in its neighborhoods, such an invigorating landscape of diversity. Rich contrasts abound—it is sprawling yet walkable, obscenely opulent and deeply gritty, frenetic with pockets of incredible tranquility. It … 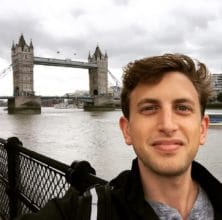 London— what a city. I just visited for the first time and absolutely loved it. The place has an unbelievable energy running through it, so much variety in its neighborhoods, such an invigorating landscape of diversity. Rich contrasts abound—it is sprawling yet walkable, obscenely opulent and deeply gritty, frenetic with pockets of incredible tranquility. It left quite an impression.

Several days of romping through London was great for putting life in Amsterdam in perspective. In some ways, I think I’d lost track of how utterly unique the city is. A few reflections on the most distinctive elements of urban life in Amsterdam.

First is the fact that nearly everything in the city is built and designed at the human scale. Very few buildings are over six stories tall. Only a handful of roads have more than two lanes. Open spaces are relatively compact.  The built environment almost never leaves you feeling dwarfed, overpowered, or anonymous. Things feel approachable, comfortable, even cozy—you are inevitably a participant in the environment around you, unable to fade into the background. The vibe is worlds away from, say, standing in the shadow of the 95-story Shard building, where you can’t help but feel like an insignificant speck relative to the scale of what’s around you.

Second is the unusual degree of aesthetic and atmospheric consistency throughout Amsterdam. There’s plenty of variety from neighborhood to neighborhood, but its subtler than in most other 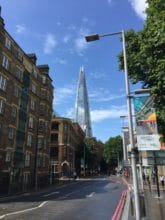 major metropolises. This creates a kind of cohesiveness to the experience of travelling through the city. Much of this has to do with the steady scale of the built environment, but the presence of the canals, the ways that streets are laid out, and the general framework used in building design also contribute significantly to this feeling. The ways that more contemporary architecture incorporates elements of older styles adds to this sense of seamlessness. Also, because the city lacks a real skyline, you seldom have any kind of visual reference point on the horizon—other than the occasional church spire, there is rarely anything to draw your attention away from the streetscape in front of you.

London, on the other hand, is shockingly jumbled. Architectural styles vary dramatically from neighborhood to neighborhood, and a single street can be home to a huge range of buildings. I was particularly struck by the mix in the formerly-industrial eastern part of town, where old, soot-stained factories and working-class apartments stand alongside gleaming, hyper-modern office buildings and condominiums. The geographic distribution of high-rises also adds to the visual complexity. Unlike, say, Chicago, where skyscrapers are confined to a specific part of town, towering buildings are scattered throughout London. It’s a dynamic that is only accelerating—cranes are absolutely everywhere.

Third is the relative lack of monumentalism in Amsterdam. Sure, there are several large, magnificent buildings—the Rijksmuseum, the Royal Palace, the Westerkerk, and others. But for a city that was once the wealthiest place on the planet, things are pretty understated. Perhaps this stems from the fact that Amsterdam’s wealth was largely private, derived from the prowess of monopolistic corporations like the Dutch East India Company, which dominated the global spice trade for almost a century. Obviously, with businesses and individuals wielding such power relative to the state during the city’s Golden Age, grand civic (or monarchic) displays were less of a priority. This isn’t to say that Amsterdam’s wealthy individuals didn’t have a public impact—they financed an enormous amount of public improvements, including massive expansions of the canal ring. But history clearly played out differently in London, with its palaces, enormous cathedrals, cavernous neo-classical museums, etc., all prominently adorned with plaques commemorating the monarch responsible for their construction.

Obviously, I’m comparing apples and oranges here. London’s population is literally ten times the size of Amsterdam’s. And the fact that the Golden Age of the Victorian era largely coincided with the industrial revolution massively influenced the trajectory of the city’s built environment. I also don’t mean to come to any value judgment—it’s often exhilarating to feel overpowered by a city’s urban intensity, stimulated by its unfathomable variety, and surrounded by extravagant public works. But being in this kind of environment for several days brought Amsterdam’s exceptionalism–it’s near-otherworldliness—into stark relief. When I head back to the United States next week, I’ll miss it very, very much.