The Super 8 was pure magic. Kodak’s first affordable lightweight amateur camera, which came on the market in the mid-60’s, gave everyone a tool with which to tell their story in moving images and keep them for posterity. From baby’s first steps to events that moved the world, the Super 8 was our eyes on the world – and the beginning of the democratization of technology.

Now it’s posterity’s turn. I recently saw two short Super 8 films, one from 1968 and one from 1969, that told very different stories about America in that turbulent decade.

First 1969. That was the year the Apollo 11 was launched, the first manned spacecraft to land on the moon – small step, great leap. At the recent John Adams event with the American astronomer David Eicher and the Dutch astronaut André Kuipers, we watched a short Super 8 movie of the launch made by the Dutchman Krijn Reitsma. He was studying economy in the US at the time and would later go on to work at McKinsey. 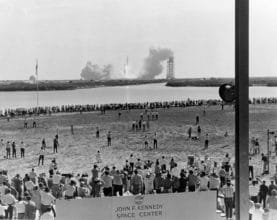 “As a member of the general public you could buy a ticket to witness the launch from Cape Canaveral in Florida”, he told the audience. “We drove in a bus along a road where you could clearly see the launch pad. We all piled out and stood there waiting.” Was everyone shouting excitedly, or were you quiet, in awe? “At first everyone was shouting ‘Go, go, go!’ ” he said. “But as it lifted off, we all fell silent.” With his camera he followed the spacecraft up through the clouds until it vanished.

I was surprised that this was the first time Krijn Reitsma had ever shown his home movie. Why? His answer was at least as surprising: “It wasn’t really that special.” Well, maybe it wasn’t then, but the passing of time has imbued it with a value that goes far beyond its cinematic qualities.

The year before, the assassination of Robert (‘Bobby’) Kennedy – as well as that of Martin Luther King just a month before – had shaken the nation. On June 8th, RFK’s body was transported by train from New York to Washington DC. On board was magazine photographer Paul Fusco, who photographed the people along the tracks who had come out to bring their final regards in the course of the eight-hour trip. 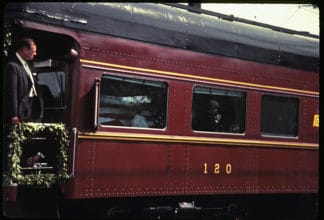 The Dutch photographer Rein Jelle Terpstra was fascinated by this document, and decided to retrace the train’s route – but now through the eyes of the people watching the train pass. He went knocking on doors to track down their photographs, slides and home videos for his project ‘The People’s View’. It is now on show at the Nederlands Fotomuseum in Rotterdam through May 12th; on that closing day, Terpstra will give a talk about his work.

One of the people Terpstra spoke with was the homeless man Larry. Larry was ‘the photographer’ of the family, he said, and with his Super 8 he had made a movie of the train. Terpstra wondered why he talked about it but never showed it – until Larry told him that it was in storage at the homeless shelter. And Larry didn’t have the money needed to pay for access to his belongings. Terpstra took care of that, and miraculously they were able to find the movie, and now it is shown on a special monitor in the exhibition. The Super 8 as tangible history. 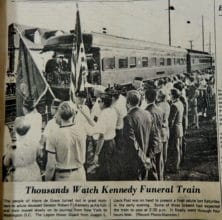 Some touching quotes from Terpstra’s interviews are also projected on the wall:

“I will never forget my mom running after that train and waving. Then she tripped and fell, and even with blood trickling down her leg and tears down her cheeks, she continued to wave.”

“When the train passed it moved very, very slowly, barely moving. Total silence from the onlookers as the train passed. Many saluted, wept openly, put their hand over their heart, held up signs.”

“Just when we wondered if the train was really coming, we saw it. People were praying, and men and moms made sure hats came off and heads bowed down as the train went by very slowly. We couldn’t afford to go to DC, but we had to say goodbye in person.”

Lecture May 12th at 3pm in the Nederlands Fotomuseum. For more info and tickets, click here. 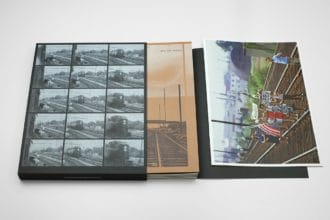