“Many years ago, I realized that a book – a novel – asks itself to be written in the same way we fall in love with someone. The book becomes impossible to resist for the author: there’s nothing you can do about it, and you finally give in and succumb, even if your instincts tell you to run the other way because this could be, in the end, a dangerous game.”

In his latest novel, The Shards, Bret Easton Ellis confronts a story that had been running around his mind for decades. It centers around what happened to him and a group of friends at the end of high school, in the height of their teenage years. A group of superficially sophisticated children not yet baptized in the ‘real world’, the lives of Bret and his friends were shattered by a series of terrible events.

In Los Angeles in the autumn of 1981, a local serial killer known only as The Trawler draws ever closer to Bret and his friends, seemingly taunting them with grotesque threats and acts of violence. As Bret’s obsession with the killer grows, he spirals into paranoia and isolation. 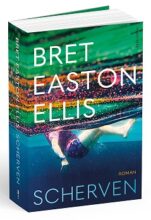 Filtered through the imagination of a teenager gifted in constructing narratives from the threads of his own life, this mesmerizing novel is a vivid and nostalgic fusing of fact and fiction at the borderlands between the real and the imagined.

Bret Easton Ellis is a notable American novelist, known for his now-iconic book American Psycho (1991). Easton Ellis is regarded as one of Generation X’s most notable literary figures, and is the host of his eponymous podcast where he interviews cultural greats from every field.

Click here to buy the book at Athenaeum Boekhandel with a 10% discount using discount code JAI10%.

In collaboration with: Ambo Anthos Uitgevers