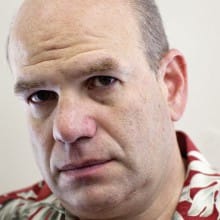 More than a few critics have called The Wire, the hit U.S. series about crime in Baltimore, the best TV show of the year. David Simon, its creator, began his career as a crime reporter for The Baltimore Sun, where he gleaned details of the city’s seamy side.  Using this material, he produced a series of bestselling books–including Homicide, which is now out in Dutch–and top TV series. The Wire intricately integrates lives (detectives, drug dealers, union bosses), uses local non-actors and almost no flashbacks, to create a gritty symphonic structure. Simon himself once said it is really “about how we live together.” In this first airing of the show in the Netherlands, David Simon took us scene by scene through an episode of what one newspaper called “broadcast literature.”

In collaboration with: Ambo Anthos Uitgevers