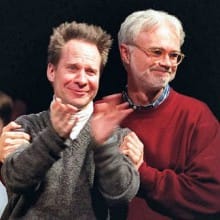 Composer John Adams and theater director Peter Sellars joined us us for a joint interview to mark the Dutch premiere of their opera Dr. Atomic. Following the success of the opera Nixon in China, Dr Atomic once again explores a politically current theme with great artistic flair, which Sellars, who wrote the libretto, skilfully links to the psychological and philosophical issues of our time. The winner of numerous awards, California-based John Adams is one of the most frequently performed living American composers. Sellars is one of the leading theatre, opera, and television directors in the world today, whose previous productions include the John Adams-composed opera A Flowering Tree, Olivier Messiaen’s St. François d’Assise, and Paul Hindemith’s Mathis der Maler.

Moderator: Elmer Schönberger, musicologist, writer and composer
In cooperation with & part of the HOLLAND FESTIVAL and sponsored by BEARINGPOINT

NEA interview with Peter Sellars about his long time collaboration with John Adams: