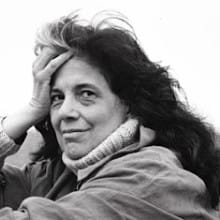 Susan Sontag was an American writer and filmmaker, teacher and political activist. Her best known works include On Photography, Against Interpretation, Styles of Radical Will, The Way We Live Now, Illness as Metaphor, Regarding the Pain of Others, The Volcano Lover and In America. She wrote extensively about photography, culture and media, AIDS and illness, human rights, and communism and leftist ideology. The Volcano Lover is the novel that made Susan Sontag a best-seller. Set in Naples, the novel focuses upon Emma Hamilton, her marriage to Sir William Hamilton, the scandal relating to her affair with Lord Nelson, her abandonment, and her descent into poverty.

Susan Sontag died in 2004 from leukemia. Read her obituary from The Guardian here.