David Salle established himself in the late 1970s as one of the representatives of the new figurative movement in American painting. His paintings present images from scenes in films or photography, together with quotations from literature or the visual arts. and combines these images with decorative or graphic patterns. The content of the images is derived from both ‘low’ and ‘high’ culture, generating multiple meanings. Their sgnificance is never quite explicit, but an atmosphere is sooner suggested which invites the viewer to make associations.

Anna Tilroe is an art critic and a professor at the National Academy of Visual Art. Her essays are regularly published in NRC Handelsblad. In 1989, she published a collection of essays, reviews and interviews titled De Blauwe Gitaar. In 1990, she received the Pierre Bayle price for her art reviews. 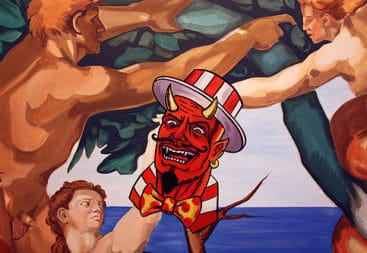