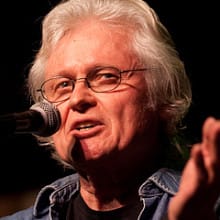 Singer-songwriter Chip Taylor took the John Adams Institute stage to talk about his special bond with The Netherlands, but also to play some of his famous songs. Taylor is the man behind such classics as Wild Thing (The Troggs), Try Just a Little Bit Harder (Janis Joplin) and Angel of the Morning (Juice Newton), and is considered one of the great American songwriters of his generation. In the mid-70’s, he turned his back on the music industry to become a professional gambler. He was one of the most feared card counters in the land and was ultimately banned from every casino in Atlantic City. His way with cards turned into an addiction, and, strangely enough, fans in the Netherlands helped to pull him back from the brink. In his book Songs from a Dutch Tour he talks about music, gambling and his bond with Dutch fans.

One thought on “Chip Taylor”