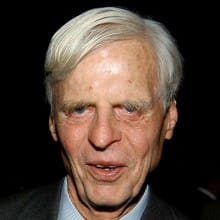 The John Adams Institute was pleased to present a unique performance of the works of Ernest Hemingway and Zelda and F. Scott Fitzgerald. Written by George Plimpton and Terry Quinn, Zelda, Scott and Ernest: A Theatrical Adaptation, was performed by Norman Mailer, Norris Church Mailer and George Plimpton on June 26 in the Stadsschouwburg, Leidseplein 26 in Amsterdam.

Even in the United States, the show has only had limited performances for prestigious cultural institutions and fundraising events, and is considered to be a rare treat. The show’s only European performances will be in Amsterdam and Paris. George Plimpton originally wrote the play as an examination of the friendship and rivalry between F. Scott Fitzgerald and Hemingway, and Terry Quinn later added Zelda as a third character. The work is a dramatic reading of the correspondence between the Fitzgeralds and Hemingway, and is also based on Zelda Fitzgerald’s novel, Save me the Waltz, and Hemingway’s memoir A Moveable Feast.

Norman Mailer was born in Long Branch, New Jersey. He is the author of over thirty books including The Armies of the Night (1968) and The Executioner’s Song (1979) both of which received the Pulitzer Prize. He wrote screenplays, appeared in movies, including When We Were Kings, and produced films. He died in 2007 at the age of 84.

Norris Church Mailer is the author of Windchill Summer (2000) and several other novels. She died in 2010 at the age of 61 after an eleven year battle with cancer.

George Plimpton was born in New York City. He was the head of the esteemed literary magazine, The Paris Review, and the author and editor of over fifteen books including Mad Ducks and Bears (1973) and Truman Capote (1997). He has appeared in several films including Lawrence of Arabia, When We Were Kings and Good Will Hunting. He died in 2003 from a heart attack at the age of 76. Read his obituary from The Guardian here.
Terry Quinn was born in New York City. He is the author of A Death in Brooklyn (1999) and The Great Bridge Conspiracy (2001). He has also written several plays and musicals, including Rasputin, A Second Chance and Georgette’s Last Rehearsal. He teaches Creative Writing at a private college in New York City. Quinn lives in Brooklyn, New York.