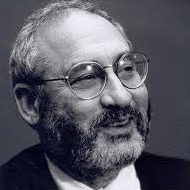 The John Adams Institute hosted Joseph E. Stiglitz, former advisor to President Clinton. The winner of the 2001 Nobel Prize in Economics gave frank and controversial talk about his book Globalization and its Discontents and spoke openly about his tenure at the World Bank. During his time in Washington D.C., he was the never shy of critiquing its financial institutions. Even the IMF did not get off scott free, as Stiglitz is a frequent critic of their policies. The event was organized together with the local Stanford Business School alumni association at Felix Meritis.