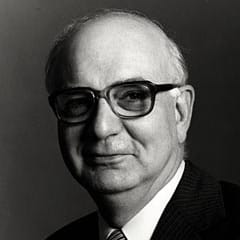 The John Adams Institute was honored to host a lecture by Paul Volcker. After serving as President of the Federal Reserve of New York for many years, Paul Volcker was named Chairman of the Board of Governors of the Federal Reserve System by President Jimmy Carter in 1979. He held this position until 1987, when he was succeeded by Greenspan. In total, Volcker worked over 30 years as a financial expert and advisor to the American government under five presidents – Kennedy, Johnson, Nixon, Carter and Reagan. In this capacity, he was often referred to as the second most powerful man in America. He recently served as the chairman of the Economic Recovery Advisory Board under President Barack Obama until January 2011.