St. Eustatius – or Statia as the English-speaking islanders say – is hardly a tourist destination. Unlike neighboring St. Maarten, visited by thousands of Dutch and American holiday-makers, St. Eustatius has no golden beaches. Yet this small Dutch island on the northern end of the Lesser Antilles is popular with divers, who are attracted by the numerous shipwrecks in the surrounding waters – all of them reminders of St. Eustatius’ turbulent past.

The island’s history is closely related to that of the United States. To learn more about this, you have to leave the lower part of the only town on the island, Oranjestad (Orangetown), and climb the Old Bay Path to the picturesque Upper Town, built on a cliff forty meters above sea level. The first major building on the top is Fort Oranje (Fort Orange), balancing on the edge of the cliff. 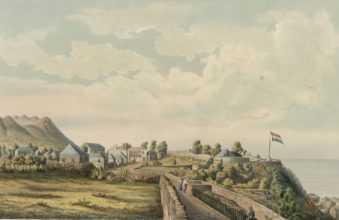 Fort Oranje in the 18th century 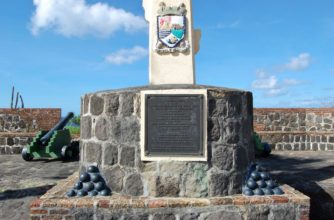 Roosevelt presented the plaque in 1939. Others followed. One plaque on the fort’s wall is from the nearby American Virgin Islands, maintaining that the salute to the Andrew Doria turned the Dutch Republic into ‘the first nation to officially recognize America’s independence’. Though this claim is somewhat at variance with the historical truth, at the time the event was certainly seen this way.

What actually happened on November 16th, 1776? That day the commander of the fort, Abraham Ravené, saw an unknown brig approaching. As was the rule, the ship carried the Dutch flag on the main mast. But from which country was the flag waving from the foremast and the stern? From a distance it looked like the ‘red ensign’, the flag all British ships carried, but on this one the red plane was divided in thirteen stripes. And was the brig a man-of-war or a merchantman?

Before anchoring the ship discharged eleven salutes, forcing the commander to decide with how many salutes he would answer: with two less, as was the rule when greeting a merchantman, or with an equal number, confirming the ships status as a war vessel – and by implication recognizing the country it represented? He asked the governor, Johannes de Graaff, for advice. Without knowing the status of the ship either he ordered: answer with two shots less.

It turned out, however, that the brig, named Andrew Doria, was a converted merchantman now in the service of the recently founded Continental – later US – Navy. It bore the new flag of the United States of America. The consequences of De Graaff’s order, therefore, were far-reaching. The governor’s defense that the salute from the island’s fort proved he was convinced that he was dealing with a merchantman, made no impression on the British government. In Britain’s view this was the utterly unjust recognition of a bunch of rebels – a hostile act Great Britain could not accept.

Next week part 2: Why did the Andrew Doria sail to St. Eustatius?

Journalist Willem de Bruin worked for most of his career at the Dutch daily newspaper De Volkskrant, as editor of the news section and later of the op-ed page where he was responsible for the daily editorial. He wrote essays for various sections of the newspaper on both domestic and international topics. He left the newspaper in 2011 to write books on history. 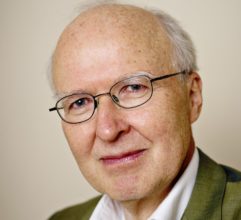