In October 1862 the federal government found itself in dire straits on virtually every front. Militarily, 1862 had been a year of mixed results. While General Ulysses S. Grant had made some headway in the Western Theater, the more high-profile Eastern Theater saw the armies of the United States government struggling. Despite being within eyesight of the church spires of the Confederate capital of Richmond, Virginia in the summer of 1862, the autumn witnessed the single bloodiest day in American history at the Battle of Antietam. A military draw, the Lincoln administration used the victory to announce the Emancipation Proclamation. This act by Lincoln had political implications in the fall Congressional midterm elections as the incumbent Republican Party experienced a contraction of their majority and went down to defeats at the state level.

But a lesser known but still vital area where the government found itself in trouble pertained to the world of finance. By October 1862, Chase struggled to sell the $500 million dollar bond issue authorized by Congress the previous February as part of the Legal Tender Act. Known informally as “five-twenties,” these bonds could be called in by the government after five years but matured in twenty. A $500 million issue, by the end of June 1862 the government sold less than $14 million since February. Secretary of the Treasury Salmon Chase found himself with his back against the proverbial wall. The tried and true method to finance America’s past wars would not work here, so what was the alternative? Into this void stepped Jay Cooke.

Born and raised in Ohio, Cooke moved to Philadelphia and entered the world of finance in 1838 before opening his own financial house on New Years Day, 1861. At the outset of the war, Cooke worked in conjunction with the state of Pennsylvania in the secession winter and early days of the conflict to sell state bonds to the populace. Cooke became well known for his marketing of the bonds and efforts to incorporate ideas like payroll withholdings from companies such as the Philadelphia & Reading Railroad. While Cooke did not know Chase personally (despite both hailing from Ohio), Jay Cooke’s brother, Henry Cooke, moved in influential newspaper circles in Ohio as a former editor and therefore found himself interacting with Chase in the antebellum period. By 1862, Chase had truly run out of options. He turned to Jay Cooke.

Jay Cooke offered a relatively new approach in the United States pertaining to war finance. Built off of French and Austrian models, Cooke posited the idea that a popular or “democratic” loan purchased by the people could help right the financial ship of the United States. Based on a heavy marketing campaign laced in patriotic rhetoric and selling bonds as low as $50 on nine-month installment plans, Cooke saw an opportunity to sell bonds nationwide. Relying on a network of effectively traveling salesman, these agents would comb the North (and eventually the South) selling bonds to millions of Americans of a wide variety of backgrounds. For Cooke’s work, he came to an arrangement of .375% or three-eighths of one percent of sales of the 5-20 issue with all marketing costs absorbed by the Philadelphia banker and a portion of that commission going to his traveling salesman (numbering 3,000 by war’s end.) 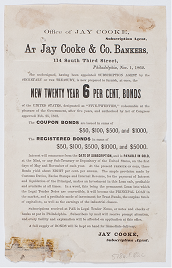 Flyer for the 5-20 Loan produced by the office of Jay Cooke & Co. in Philadelphia

Cooke met with wild success. What had begun as a trickle of 5-20 sales in the spring and summer of 1862 quickly took off. In January 1864, the $500 million loan closed (oversubscribed at $514 million.) Cooke had helped to stabilize Union finances, even as the war ebbed and flowed from the Atlantic coast across the continent. But to talk about the power and importance of Union bonds during the Civil War and only focus on the domestic sales misses a crucial part of the story. For perhaps equally as important to the work undertaken by Cooke in the United States was the work by bankers, diplomats, and other non-state actors in the halls of power in Europe.

David K. Thomson is an Associate Professor of History at Sacred Heart University in Fairfield, Connecticut, USA. Thomson’s focus is on the financial history of the American Civil War era. His first book on the topic, ‘Bonds of War’, published by the University of North Carolina Press in April 2022 traces the crucially important role of bond sales by the United States government during the war to fund the conflict. Thomson’s work has also been featured in the New York Times, Washington Post, and Bloomberg. Click here for part 1 of this blog series.